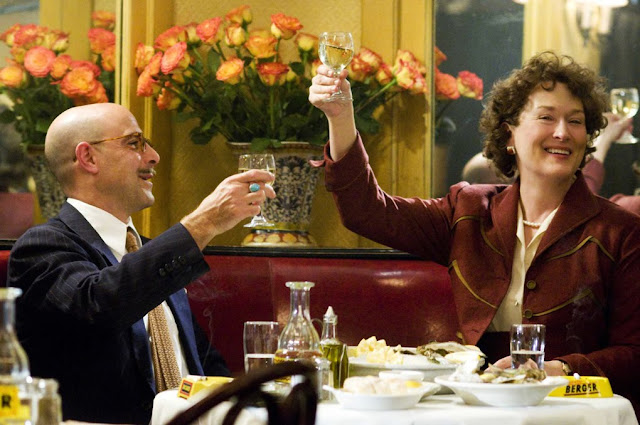 “Cooking is like love. It should be entered into with abandon or not at all.” - Harriet van Horne

I was in Brisbane today for work and it was an exhausting day. It is not very good to commute over such long distances as the day becomes tiring and one’s body objects somewhat. I must be getting old! I spent the whole day in a small room with the auditors that we had around, but at least all went well and the trip was successful.

At the weekend we saw an interesting little film, which on reflection was mildly amusing, but otherwise nothing to write home about. It was Nora Ephron’s 2009 “Julie & Julia”. The film is a double biography of famous American cook Julia Child and the less famous Julie Powell, also a cook and author. Meryl Streep who played Child overacted somewhat, just to ensure that everyone knew who the star was in the movie, while the rest of the cast were fairly competent.

The film is a constant hashing backward and forward in time (and place), between 1949 Paris and 2002 New York. In 1949, Julia Child, the wife of a diplomat, tries to spend her days constructively while her hubby (played in a laid back way by Stanley Tucci) works in the embassy. She tries millinery, bridge, and then cooking lessons at the Cordon Bleu school. There she discovers her passion for food and we follow her life until she writes her first cookbook. In 2002, Julie Powell, a public servant and unpublished author, decides to cook her way through Child’s “Mastering the Art of French Cooking” in a year and to blog about it.

The stories and the two women’s lives become tangled as there many common elements: Good friends (mostly), loving husbands, and of course the food. The zest of French cooking is conveyed well and the 1949 Paris scenes are well shot. I began to watch the film with interest, but halfway through I started drifting off. It was too long, too repetitive and Julia Child was too much, while Julie Powell was too bratty and had too many tantrums.

Nothing much happens in the film except for cooking and people talking at  one another. I don’t know, maybe I wasn’t in the mood…
Posted by Intelliblog at 01:25