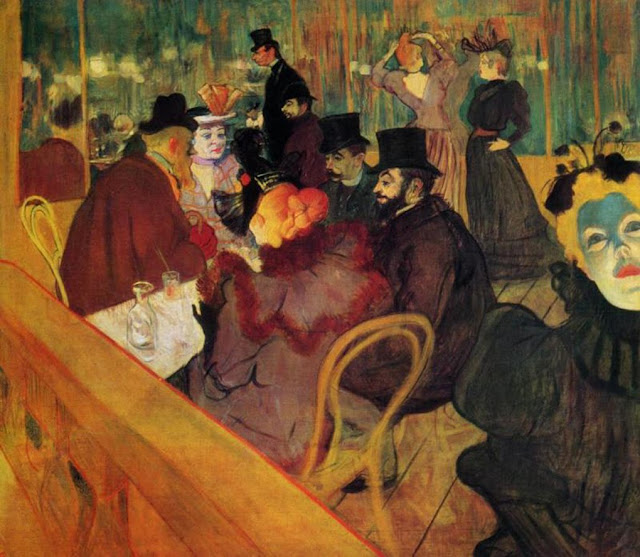 “It is with our passions as it is with fire and water; they are good servants, but bad masters.” - Roger L'Estrange

Toulouse Lautrec for Art Sunday today, and in fact one of his most famous works: “At Le Moulin Rouge”, the notorious cabaret in Montmartre where Lautrec was often found associating with the demimonde and its citizens of the night.

Henri de Toulouse-Lautrec was born on November 24th, 1864, in Albi, France. He was  the son and heir of Comte Alphonse-Charles de Toulouse and last in line of an aristocratic family that dated back a thousand years. Henri’s father was rich, handsome, and eccentric. His mother was overly devoted to her only living child, Henri, who was weak and often sick. By the time he was 10 he had begun to draw and paint.

At 12 young Toulouse-Lautrec broke his left leg and at 14 his right leg. The bones failed to heal properly, and his legs stopped growing. He reached young adulthood with a body trunk of normal size but with abnormally short legs. He was only 1.5 meters tall. Deprived of the kind of life that a normal body would have permitted, Toulouse-Lautrec lived wholly for his art. He stayed in the Montmartre section of Paris, the center of the cabaret entertainment and bohemian life that he loved to paint. Circuses, dance halls and nightclubs, racetracks. He observed all of these spectacles and he worked feverishly to set them down on canvas or made into lithographs.

Toulouse-Lautrec was very much a part of all this activity. He would sit at a crowded nightclub table, laughing and drinking, and at the same time he would make swift sketches. The next morning in his studio he would expand the sketches into bright-coloured paintings. In order to become a part of the Montmartre life, as well as to protect himself against the crowd's ridicule of his appearance, Lautrec began to drink heavily. In the 1890s the drinking started to affect his health. He was confined to a sanatorium and to his mother’s care at home, but he could not stay away from alcohol. Lautrec died on September 9th 1901, at the family chateau of Malrome. Since then his paintings and posters, particularly the Moulin Rouge group, have been in great demand and bring high prices at auctions and art sales.

The painting above epitomizes Lautrec’s life: In the background is La Goulue, the Moulin Rouge’s reigning dance star, who is adjusting her red hair while the dwarfish Toulouse-Lautrec and his tall cousin, Gabriel Tapié de Céléreyan, walk toward the left. The glum assembly of characters seated around the table includes writer Édouard Dujardin, entertainer La Macarona, photographer Paul Sescau, winemaker Maurice Guibert and another redhead, most likely entertainer Jane Avril. The woman with the green face illuminated with artificial light is May Milton, another popular dancer of the day.
Posted by Intelliblog at 02:22