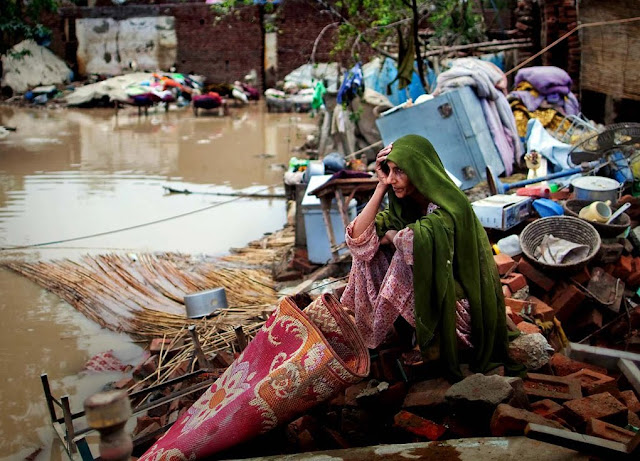 “He who gives when he is asked has waited too long.” - Sunshine Magazine

The news that keeps coming out of Pakistan is mind-numbing. The extent of the humanitarian and environmental disaster there is of amazingly tragic proportions. Even while away I was keeping up with the news on BBC World on TV and since getting back I have been following the relief effort with concern. Last week the World Bank estimated that the floods destroyed crops worth around $1 billion. Pakistani estimates place this figure to at least double that. About 17 million acres of agricultural land have been submerged, and more than 100,000 animals have perished. This is a severe economic burden for the country, where about a quarter of the economy and nearly a half of its workforce depend on agriculture.

The floods, the worst in Pakistan’s history, have affected at least 14 million people with over 1,600 fatalities. No doubt the death toll is bound to rise in the wake of even more downpours, further flooding and the terrible wave of concomitant infectious disease epidemics. Cholera, dysentery, typhoid, paratyphoid, hepatitis and other diseases will cause much distress and even more tragedy in a country that has already suffered enormous losses. The pictures that accompany the news reports are heart-rending and even the most hardened amongst us, used to daily reports of fatalities, tragedies, terrorism and natural disasters, cannot but be moved.

Anger amongst the survivors is mounting with reports of inadequate aid provision, hunger, lack of clean water and shelter. Unfortunately, the appeals for help from Pakistan although loud and clear are unheeded by many. Various agencies that are usually involved in international appeals and aid are struggling to attract funds for the millions of Pakistani flood victims. The international aid effort has been meagre because the country suffers from an “image deficit”. I find this the most distasteful and inhuman characterisation of a woeful response. To have approximately 20 million people affected directly and indirectly, the great majority of them poor and innocent, with aid being withheld because of fears it will go to the hands of the Taliban is quite monstrous.

The victims are farmers, mothers, children. Poor agricultural workers that struggle to survive in the best of circumstances and often, they themselves are victims of the Taliban. The media so often paints Pakistan in dark colours, that public opinion links it immediately to terrorism and corruption. By extension, through some weird logic the victims are not as innocent as others. The UN is struggling to obtain $A515 million to provide emergency aid to six million victims of the country ravaged by heavy flooding. According to the latest update of funding pledges, the international community has transferred $A166 million (32%) of the total needed by the UN since the appeal was launched last week. Yesterday, the World Bank agreed to provide a $A1.01 billion loan to Pakistan following a request from Islamabad. No doubt a hefty interest will be charged…

What a marvellous civilisation we have evolved into! This is the 21st century informed by centuries of history, enriched by experience, wealthy beyond the dreams of most empires of the past, more informed, more educated, more able to be compassionate and just and charitable and humane… And yet we turn off our noble sentiments and withhold our sympathy, deny our aid to a stricken groups simply because the country they live in has a “bad image”. It’s like denying giving the starving elderly beggar a dollar because he might spend it unwisely, or lose it. We have become so civilised, so refined, so sensitive and so politically correct that we have lost our humanity…

Please donate to the Pakistan appeal in any of these sites here: