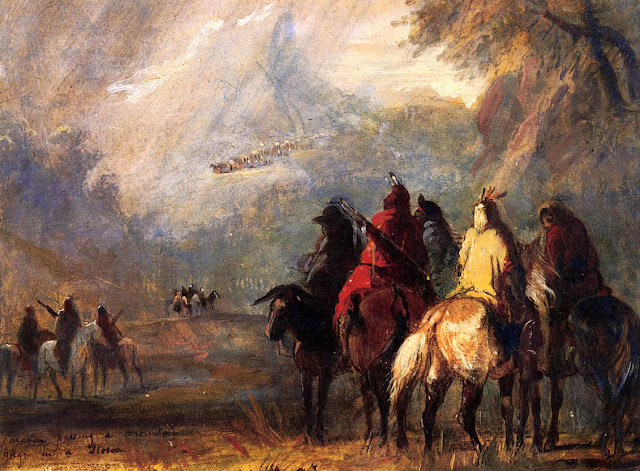 “Illegal aliens have always been a problem in the United States. Ask any Indian.” - Robert Orben

A cold, gray and wet day today conducive to staying inside and trying to finish some chores and tasks, but also taking some time to have a break and watch a movie. Whatever happened to our Spring this year? It’s like a northern hemisphere November…

Today for Art Sunday, a painting by an 19th century American artist, Alfred Jacob Miller. He was born in Baltimore on the 10th January 1810 and died there in 1874. He was encouraged to draw by his parents, and had local training in Baltimore and studied portraiture. Miller studied with the portrait painter Thomas Sully in Philadelphia, from 1831 to 1832 . In 1832 he went to France, where he studied in Paris at the École des Beaux-Arts. He also visited Rome before returning to Baltimore, where he opened a portrait studio in 1834. Three years later Miller moved to New Orleans and was engaged by Captain William Drummond Stewart to accompany an expedition to the Rocky Mountains. The journey brought Miller into close contact with the American Indians, whose hunting and social customs he depicted in 200 watercolour sketches. Although he portrayed Indians, he was not especially realistic in his depictions but romanticised his subjects, comparing the Indians of the West to Greek sculptural figures.

He also experienced the Far West, where he met fur trappers at their annual trading gatherings. He was one of the first artists to leave a detailed visual account of the life of the American mountain men. Miller’s Rocky Mountain paintings are among the most romantic images of the American West created. His works are often dramatic and romantically panoramic in their scope, but he was equally skilled at painting charming and intimate scenes. He had a free painting style, with a vigour that suited both the American Indian and the rugged pioneer. Collectors nowadays appreciate his paintings as they convey the drama, danger and picturesque qualities of the American West of his day.

Here is a favourite painting of mine, the “Caravan Passing a Mountain Gorge in a Storm”. There is much drama in the setting, the composition and the colours of this work. The three groups of Indians watch patiently the approaching caravan as it negotiates the mountain pass and as the storm brews. We suspect that a confrontation will soon occur and the ominous colours and distant view shrouded in mist compounds the tension. In the sky, flashes of light that are mirrored by the bright capes of the Indians. This is a watercolour sketch executed rapidly, but with a mastery of stroke and a good eye for colour.
Posted by Intelliblog at 01:23