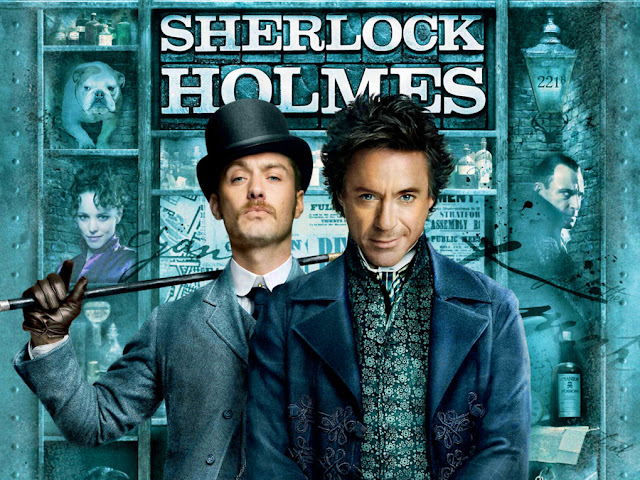 “It was very superficial, my dear Watson, I assure you…” – Sir Arthur Conan Doyle

We watched the 2009 Guy Ritchie $90-million-movie “Sherlock Holmes” yesterday. It was a cold, wet, and gray Sunday, so in the middle of the day, after we had done some chores around the house we settled down with a large bowl of popcorn and vegged out in front of the TV. This movie was a re-engineering of the famous Conan Doyle hero and a more modern take on the storyline, which had little to do with the original stories. Holmes and Watson were there of course, as well as the bumptious and rather slow-witted head of the Scotland Yard, but there were some interesting additions, not the least of which were the romantic interests of the two detectives (just to dispel the suspicion that Holmes and Watson had a “thing” going on between them, I guess…).

The film ran for nearly 130 minutes, so yes, it was long and sometimes a little repetitive (especially where the action sequences and the violence were concerned – and there was a lot of violence!). Robert Downey Jr played the super sleuth (and he did remind us of a young Dustin Hoffman!), while Jude Law made a fairly dashing and svelte Dr Watson. Rachel McAdams was the duplicitous Irene Adler, Holmes’ love interest, while Kelly Reilly was Mary Morstan, Dr Watson’s sweetheart. Top honours go to Mark Strong who played the villain, Lord Blackwood. This was a juicy suitably dark role and Strong played it with relish and a dash of pantomime tongue-in-cheekiness. Eddie Marsan played Inspector Lestrade well and in an admirable restrained manner.

The settings, costumes and computer-generated imagery were excellent and one got a feel of the 19th century London that was the setting of the Holmes stories. 221A Baker St was suitably Victorian and most outdoor shots give full view of the bleak, gray, foggy picture of London one has in one’s mind as “typical”. The music was well-suited to the atmosphere of the movie and in the able hands of Hans Zimmer, an experienced film composer. Even Holmes’ violin steals quite a few scenes, although it is more of a meditative device rather than a musical instrument in the hands of Holmes.

Now for the plot: Lord Blackwood is a Satanist who has killed 5 women and is about to dispose of another, but is caught in flagrante delicto by Holmes and Watson. He is sentenced to death and hanged, to be pronounced dead by Watson himself. When Blackwood returns from the dead, Holmes is puzzled and Watson offended and shamed. The grand plan of Blackwood is take over Britain, the Empire and the World, reigning supreme as the all-powerful despot. Add to that a subplot where Watson is attempting to leave Holmes in order to settle down with his chosen lady-love (and Holmes resisting mightily like a spurned lover), the return of Holmes’ own paramour but in a more dangerous guise than previously, as well as the veiled appearance of Professor Moriarty on a couple of occasions (no doubt paving the way for a future sequel…).

The film has much violence, much action, much tension and much too much mayhem that tends to get in the way of the (fairly good) story. There is a little bit of a disconnect between the mindless brawls and the more cerebral parts of the film where Holmes’ deductive powers are highlighted and his caustic humour showcased. Downey Jr does a good job of both the action parts, as well as the more ironic and intellectual components of the role. Jude Law is a good Watson, although much younger and slimmer and more active than the Watson originally appended to the super-sleuth by Conan Doyle.

It was an entertaining and amusing film, not intended for purists, but much in the mould of “inspired by” type of film that is quite common nowadays. Closer, however, to the Conan Doyle’s fiction than say the latest version of “Alice” is to Lewis Carroll’s immortal creation. Despite the violence (which one quickly tires of) and the action (which any film aiming for good box office takings must have nowadays), this is a fairly good thrilling film, so watch it for a bit of fun. Incidentally, all is well-explained in the end, and there is no need for a deus-ex-machina solution.
Posted by Intelliblog at 21:56