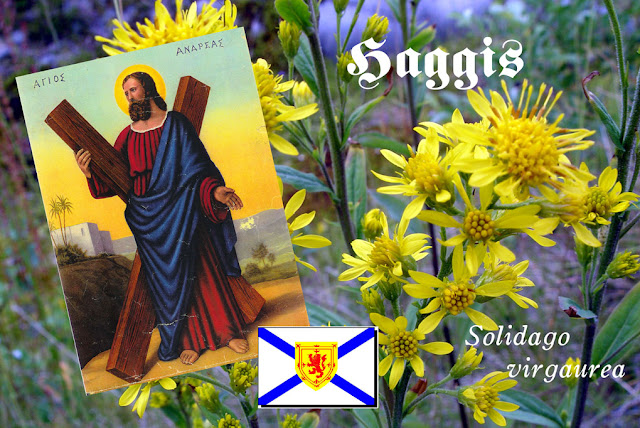 The birthday flower for today is the golden rod, Solidago virgaurea.  It symbolises encouragement and precaution.  The astrologers believe the plant to be under Saturn’s dominion and in the zodiacal house of Virgo.  It was believed that a rod of the plant would divine the places where hidden treasures lay.

Today is St Andrew’s Day:
St Andrew the King
Three weeks and three days
Before Christmas comes in...
The first-called of the Apostles, St Andrew was a Galilean fisherman, St Peter’s brother.  According to legend he was martyred by being crucified in Greece on an X-shaped (St Andrew’s) cross.  His relics are said to have been transported to St Andrews in Fife in the 4th century AD.  St Andrew is the Patron Saint of Cyprus, Russia, Scotland and of the Greek City of Patras in the Peloponnese.  Fishermen and fishmongers also claim affinity with this saint.  In Scotland, the traditional fare for this day is boiled or roast lamb’s head, haggis and whisky.

Haggis was known in ancient Greece with Aristophanes describing around 400 BC the explosion of a “stuffed sheep’s paunch” at table when it was incautiously attacked by the diners.  A roman recipe for it is given by Apicius. English recipes survive from the 15th century and it was a popular dish in England well into the 18th century.  Nowadays, it only survives in Scotland.  The Scottish dish consists of a mixture of the minced heart, lungs, and liver of a sheep or calf mixed with suet, onions, oatmeal, and seasonings and boiled in the cleaned stomach of the slaughtered animal.
Posted by Intelliblog at 00:49