THE ELOQUENCE OF SILENCE 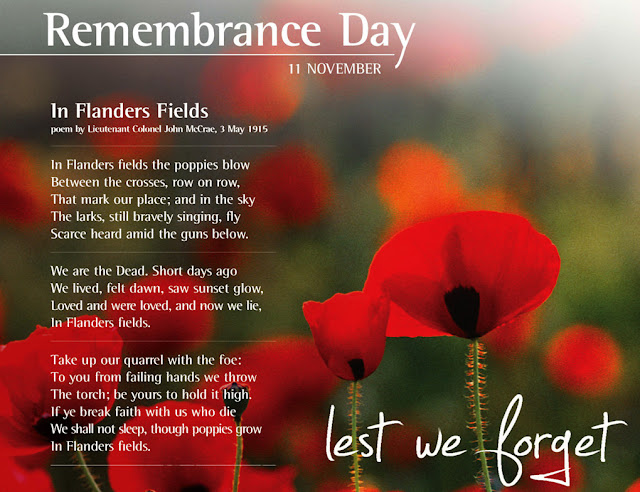 “Let us be silent, that we may hear the whispers of the gods.” - Ralph Waldo Emerson

Today is Remembrance Day, with the eleventh hour of the eleventh day of the eleventh month marking the signing of the Armistice, on 11th November 1918, to signal the end of World War One. It is a special day set aside to remember all the men and women who were killed during the two World Wars and other conflicts around the globe. At one time the day was known as Armistice Day but was renamed Remembrance Day after the Second World War. Wreaths are laid beside war memorials by companies, clubs and societies. People may also leave small wooden crosses by the memorials in remembrance of a family member who died in war.

The “Last Post” is traditionally played to introduce the minute’s silence in Remembrance Day ceremonies. It is usually played on a bugle. (In military life, “The Last Post” marks the end of the day and the final farewell.) The sounding of “Reveille”, ends the minute’s silence, followed by the recitation of the “Ode of Remembrance” (“For the Fallen”) by Laurence Binyon (1869 - 1943).

The Fourth stanza of this ode is the most famous and reads:
“They shall grow not old, as we that are left grow old:
Age shall not weary them, nor the years condemn.
At the going down of the sun and in the morning
We will remember them.”

Remembrance Day is also known as Poppy Day, because it is traditional to wear an artificial poppy. The link between Red Poppies and war is usually attributed to a Canadian physician and soldier, Lt. Col. John McCrae, through his famous poem about WW1, “In Flanders Field”; published in Punch Magazine in 1915. The obvious symbolic correlation between red poppy and blood spilt with loss of life on European battlefields, had already been noted by the end of the Napoleonic wars at the beginning of the 19th century.

I would not describe myself as a redneck, as a nationalist, as an extremist or a fascist. I have always thought of myself as quite democratic, perhaps leaning towards the side of socialism and humanism. I feel that extreme acts of nationalistic pride are quite old-fashioned and out of place in the modern world, where national frontiers are being broken down and world populations are becoming increasingly mobile and have begun to mix freely. Extreme religiosity and fanaticism about religion is insulting and intolerant to the extreme and religion is the cause of much violence, pain and hardship. Most religious fanatics go against the basic tenets of their faith in their extremism; and that goes for any faith, whether Christian, Muslim, Hindu, or whatever else.

However, reading an article today in the newspaper I was quite annoyed and even angered. VicRoads, one of our Government Departments that looks after our roads admitted that they forbade their staff to observe the minute’s silence for Remembrance Day. The excuse they gave was that they “did not wish to offend people from different cultural backgrounds…” I have not heard a more offensive reason! What about the offence that such rubbish causes to the Australian population, whose young men died in their thousands in wars thousands of kilometers away over the past century or so?

If one migrates or visits this country, they do so bearing in mind that they are coming into a country where certain laws, by-laws, traditions, culture and language are in force. Most people come to Australia, precisely because of what this country has to offer in terms of safety, respect, lifestyle and an environment and where they can have freedom to retain their own culture, religion and language. However, if the lifestyle, customs, culture and language of this country offends them, then perhaps they have chosen the wrong country to come into. If someone is offended by having to hold their tongue for a minute as a mark of respect for the fallen of all wars around the world, there is something wrong.

Even if this is cause of distress or offence for anyone, then by all means let them take a sick day and stay at home and shout to their heart’s content on the eleventh hour of the eleventh day of the eleventh month! You cannot please all people all of the time, so you try and please most of the people as long it is reasonable and fair and equitable to do so.

My workplace is multicultural. There are Australians, Italians, Greeks, Indians, Spaniards, South Americans, Germans, New Zealanders, Indonesians, Japanese, Serbs, Ethiopians, South Africans. We all observed the minute’s silence, most people wore a poppy on their lapel. We were silent and we paid tribute to our dead, even if they were on opposing sides in past wars. We lamented the wasted lives and the youth that were robbed of the contentment of old age, the joy of seeing their descendants carry their families on. We remembered irrespective of race, religion, politics or other persuasion. We shared our humanity that silent minute and reflected on the futility of war, all wars, all countries. I don’t think we offended anyone…
Posted by Intelliblog at 00:24