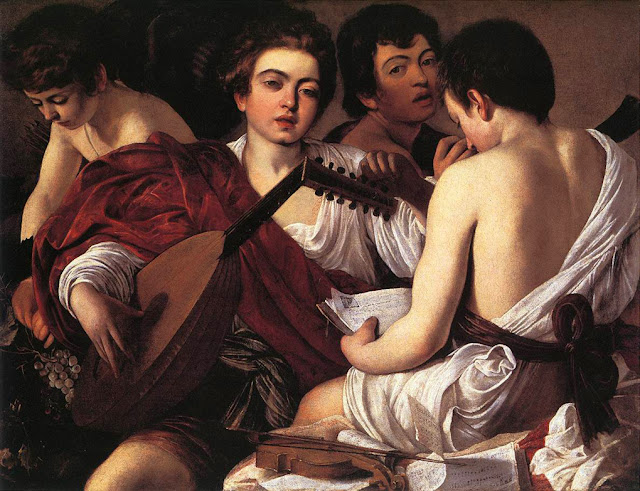 “The artist does not see things as they are, but as he is.” - Alfred Tonnellé

For Art Sunday today, Caravaggio – or to give him his correct name: Michelangelo Merisi da Caravaggio (1571-1610). He was an artist who achieved one of the most important revolutions in painting. He came into a world where the classical idealism of Michelangelo was still the norm (all the more so in the depiction of the human body), and where the peculiarities of his successors, who did not paint from life at all, distorted what the eye actually sees.

Caravaggio (so-called from his town of birth, near Bergamo) rejected both of these notions completely His realism was immediate until then unequalled. His painting style was so novel and influential, that it had an immediate, profound and lasting impact. All the great painters of the first half of the seventeenth century paid homage to it and it helped shape the golden age of European art in the decades ahead.

Caravaggio’s technique was as spontaneous as his temper. He painted straight onto the canvas with minimal preparation, contrary to what his colleagues were doing at the time, who spent much time in sketching, making studies and underpainting for days or weeks before starting the painting proper. Sometimes he abandoned a disappointing composition and painted new work over the top. Much to the horror of his critics, he used ordinary working people with irregular, rough and faces full of character as models for his saints and showed them in recognisably contemporary surroundings. This offended many people who saw prostitutes dressed up as saints and neighbourhood drunks posing as apostles.

His paintings are characterised by their dramatic, almost theatrical lighting and Caravaggio is acknowledged as the master of “chiaroscuro” (a light and shade effect of high contrast created by light falling unevenly or from a particular direction on something). Caravaggio created his own style, flouting convention and breaking all the rules in the book. This turned his life first into anarchy, then tragedy, but also made him an artist of astonishing originality and creative power. He destroyed the old order and imposed a new one.

The work illustrated above is “The Musicians”,  was painted in 1595-1596 for Cardinal Francesco Maria Del Monte, one of the leading connoisseurs in Rome. It is now in the Metropolitan Museum of Art, New York.
Posted by Intelliblog at 01:18