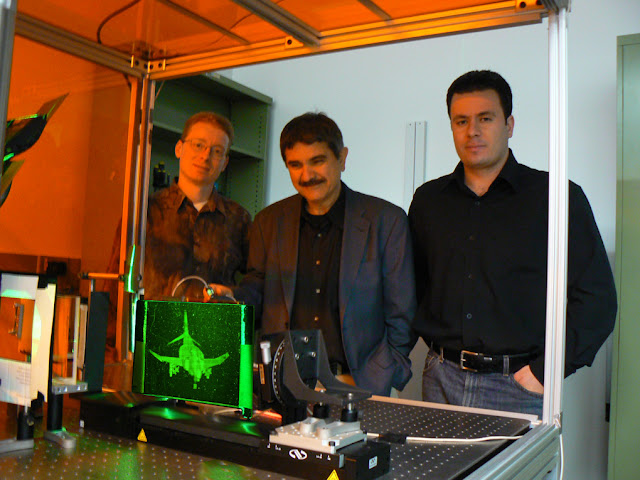 “Technology... the knack of so arranging the world that we don't have to experience it.” - Max Frisch

I read in the paper today that American researchers have developed a holographic system that can record a moving 3D image of a person or object in one place and display it at another location in close to real time. The technology involves a “clever” plastic material that updates the 3D holographic image every two seconds and is the basis of the new system developed by a research team led by Nasser Peyghambarian, of the University of Arizona. The researchers said that although the system was still slow, and the 3D image produced so far was very small, they demonstrated that it could be done and was no longer something in science fiction.

Increases in image size, updating speed and wide colour range were needed before the system would become a commercial proposition, possibly within seven to 10 years. Professor Peyghambarian predicted there would be many applications, including telemedicine, advertising, teleconferencing, entertainment and engineering design. A demonstration of the technology, using a model jet plane, is reported in the premier science journal “Nature”. In the prototype system, 16 cameras were used to take pictures of the subject from a variety of angles. This information was fed into a computer and sent down a fast internet connection to a different location where lasers produced a coloured 3D image of the subject in the 25 centimetre photorefractive polymer screen.

The 16 pictures that are captured are sent to the laser recording system, which imprints the view into the special polymer at a four-inch-squared size (made up of 120, 3D pixels, called hogels). Each hogel looks different from different angles. The next image is taken and used to refresh the display two seconds later. The more cameras that are used, the more life-like the image would be, with up to 100 different perspectives possible with the holographic technology, compared with only two in 3D movies, such as Avatar, the researchers stated.

This is the first time researchers have demonstrated an optical material that can display “holographic video,” as opposed to static holograms found in credit cards and product packages. The prototype looks like a chunk of acrylic, but it’s actually an amazing material, called a photorefractive polymer, with remarkable optical properties making the rendering of holographic images possible.

The pace at which technology is advancing is quite amazing! When super 8 movies became available for home use, as I remember from my childhood, I thought it was a fantastic thing. Then of course we had video tapes and video cameras, which were a further advance, so much easier, cheaper and simpler to use. Everyone was astounded! We then had the advent of digital recording on USB sticks and memory cards, DVDs and further ease of quite high-powered video and editing capabilities put in the hands of the ordinary person. Now there is 3D technology afoot, and soon 3D holograms! In 10 years the world will be an even more fantastic and amazing place with half of the things that we see now as the peak of scientific and technological advancement being already obsolete. Just when you thought it was safe to upgrade your DVD collection to BluRay, think again!