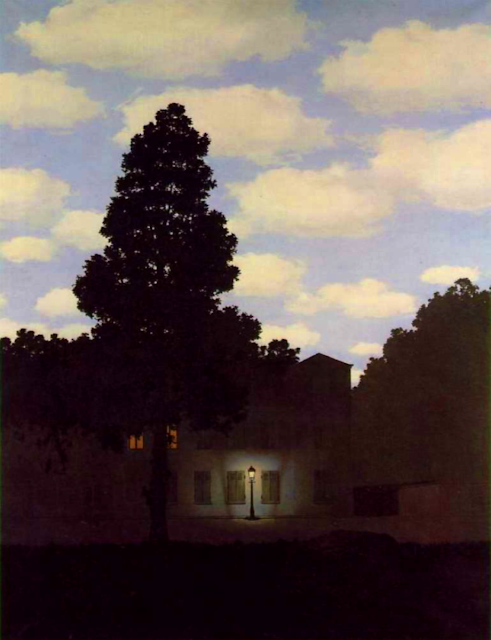 “There are very few monsters that warrant the fear we have of them.” - Andre Gide

For Art Sunday today, a painting by René Magritte (1898 – 1967), the Belgian surrealist artist who produced some startling and thought provoking works. While some of his canvases are quite chilling, this illustrated work, while superficially simple and innocent has quite a frightening atmosphere the longer one contemplates it. There is something disquieting and quite disturbing about it. The twilight and palpable darkness of the house and tree in the foreground contrasts with light of the sky and the feeble streetlight. The lit upstairs windows of the house, partly obscured by the dark tree foliage are particularly sinister, especially as they contrast with the shuttered downstairs windows. The same contrast that makes the painting unsettling is the light, almost daytime sky with the incongruous night-time scene below.

This is one version of a series of works by Magritte, all called “Empire of Lights”. This is the first Empire of Light (L’ Empire des lumières), 1953–54. It is Oil on canvas, 195.4 x 131.2 cm and is found in The Solomon R. Guggenheim Foundation, Peggy Guggenheim Collection, Venice.

I though this apt for Halloween night, as it’s the sort of house you would not want to go trick-or-treating at!

From ghoulies and ghosties
And long-leggedy beasties
And things that go bump in the night,
Good Lord, deliver us!
Scottish Saying
Posted by Intelliblog at 01:35