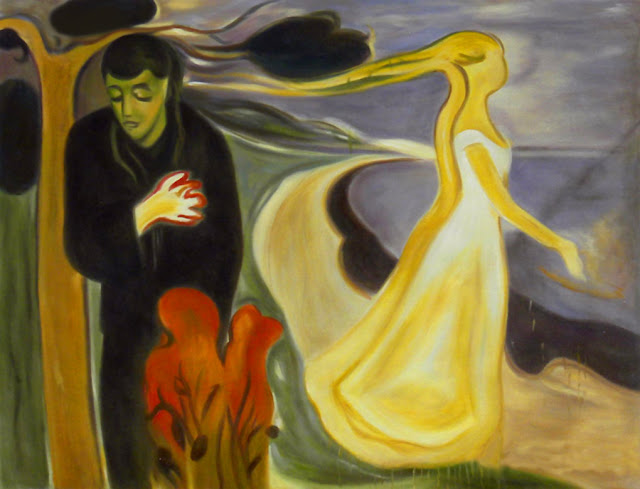 “Parting is all we know of heaven and all we need to know of hell.” - Emily Dickinson

Edvard Munch, born on December 12th, 1863 in Löten, Norway and died January 23rd, 1944, was a Norwegian artist whose highly evocative treatment of psychological themes was built on late 19th-century Symbolism. His work greatly influenced German Expressionism in the early 20th century. His most famous painting, “The Scream” (or sometimes called “The Cry” of 1893), can be seen as a symbol of modern spiritual anguish.

Munch was born into a middle-class family that was plagued with sickness and death. His mother died when he was five, his eldest sister when he was 14, both of tuberculosis; Munch eventually depicted the death of his sister in his first masterpiece, “The Sick Child” (1885–86). Munch’s father and brother also died when he was still young, and another sister developed mental illness. “Illness, insanity, and death,” as he said, “were the black angels that kept watch over my cradle and accompanied me all my life.”

Munch assimilated French Impressionism after a trip to Paris in 1889 and his contact from about 1890 with the work of the Post-Impressionist painters Paul Gauguin and Henri de Toulouse-Lautrec. In some of his paintings from this period he adopted the Impressionists’ open brushstrokes, but Gauguin’s use of the bounding line was to prove more congenial to him, as was the Synthetist artists’ ambition to go beyond the depiction of external nature and give form to an inner vision.

The artist’s own style fully developed about 1892. The flowing use of line in his new paintings was similar to that of contemporary Art Nouveau but Munch used line not as decoration but as a vehicle for psychological expression. This outraged Norwegian critics and was echoed by their counterparts in Berlin when Munch exhibited a large number of his paintings there in 1892. The violent emotion of his paintings, their frank representations of sexuality, and his innovative technique (with paintings which most people found looking unfinished) created a scandal, which helped make his name known throughout Germany, and from there his reputation spread farther. Munch lived mainly in Berlin in 1892–95 and then in Paris in 1896–97, and he continued to move around extensively until he settled in Norway in 1910.

Munch joined the revolt against naturalistic 19th-century academic painting and also went beyond the naturalism still inherent in Impressionism. His concentration on emotional essentials sometimes led to radical simplifications of form and an expressive use of colour. A number of younger artists, followed his lead and created the school of German Expressionism. His work continues to be relevant as it highlights the typically modern situation of the individual facing the uncertainty of a rapidly changing contemporary world.

Above is his “Separation” of 1900 (Oil on canvas 125.5 x 190.5 cm).  I find this an extremely evocative and expressive painting of a situation most of us have faced and had emotional experiences of. A lover clutches his heart with a red hand, as though it is alight with the flames that consume his breast. His eyes are closed and we see through their blind vision, his beloved fleeing away, like a shade departing for the other life. The painting could have just as well have been called “Orpheus and Euridice” or “Romeo and Juliet”, or “Tristan and Isolde”. The use of colour is particularly striking, with the deathly green of the lover and the distant sunny yellow of remembered happinesses colouring the beloved’s shade. In the foreground a reddish orange vegetative form is like an ever-burning fire of love that mirrors the fires in the heart of the lover. The greys, blues, olives and black of the background set the mournful tones of the scene. It is separation, indeed!
Posted by Intelliblog at 01:42