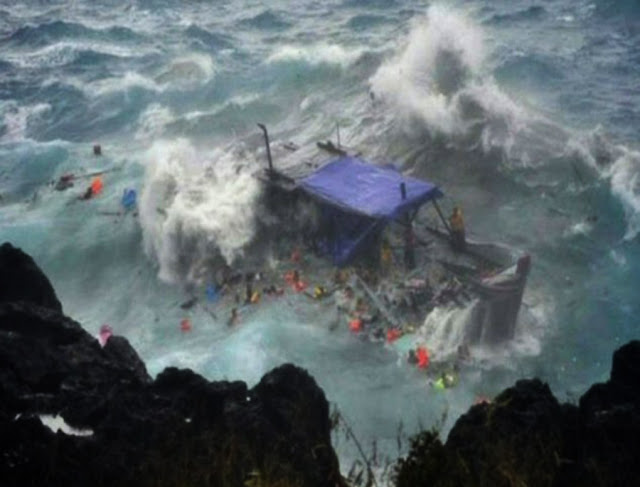 The bad news around the sinking of an illegal boat carrying people to Christmas Island has dampened the festive mood of the country somewhat. This tragedy occurred yesterday as a boatload of asylum seekers, many of them from Iran and Iraq, crashed on the rocky shores of Christmas Island off the West Australian Coast. The cliffs of the Christmas Island shoreline are treacherous and they have claimed many a sailor’s life in the past. Locals know that when the wind is blowing onshore none can land in Flying Fish Cove (sometimes for weeks at a time).

Christmas Island is volcanic and is the top of a submarine mountain sticking out of the Indian Ocean. It is a territory of Australia and has a permanent population of about 1,400 people.  Navy and Customs are everywhere in the heavily patrolled seas around it. For a boat to reach the cove undetected is very unusual. Some of these boats full of asylum seekers are allowed to make their own way to port under escort, but normally, they are intercepted far out at sea and their passengers are taken on board the navy vessel, to be taken to the island. This didn’t happen this time, with the mystery of this tragedy being how that boat was allowed so near the cliffs of the shore in such terrible weather conditions. The navy explained that extraordinarily bad weather had led to very low visibility, and a wooden vessel made radar detection almost impossible.

The boat had between 70 and 100 asylum seekers on board. The 28 dead included 12 men, nine women, two boys, one girl, and four infants (of whom three were girls). It is still unclear how many people were on board the boat when it crashed and it is expected that the death toll could rise. Forty-two survivors have been accounted for. Of these, 25 men, eight women and nine children have been rescued. Two women were flown to Perth in serious condition. This recent incident is part of a record-setting year in migrant boat arrivals into Australia. Some 6,300 asylum seekers reached Australia on 130 boats in 2010. In 2009 Australia admitted a total of 11,100 refugees.

The immediate reaction after the horror that the images of the tragedy engendered was one of guilt and self-examination. There has always been debate over how the Australian Government should process asylum seekers (whilst ensuring their safety). However, there is also the other side of the coin concerning respecting citizens’ concerns over the economic burden of mass migration. Australia has been built on migration and there are still large numbers of foreign-born residents and citizens forming an integral part of its multicultural society. However, in these critical times we live in, with an insecure future, dwindling natural resources and in the wake of the global financial crisis, mass migration into Australia is a political hot potato.

Australia is a generous and compassionate country, ready to accept genuine refugees and asylum seekers, but is now wary of the exploits of people smugglers and economic refugees who may not have the best interests of Australia in mind when they seek to settle here for a short time. In the wake of this most recent incident, calls came for a change in the current government policy designating Christmas Island as the principal refugee processing center. In Australia, similar incidents have in the past sparked the government to rethink its policy on asylum seekers.

And yet, Australia is not alone in its thinking or its political stance against mass immigration. In many developed countries around the world, border control is becoming more stringent and unfortunately even genuine refugees who seek asylum on humanitarian or political grounds are refused entry. In some cases even internal migration is discouraged, with rural “immigrants” being refused inclusion into the urban societies where they wish to move to.

The question is a vexed one and a fine balance must be struck. Australia sorely needs to increase its population and especially so where young, skilled workers and professionals are involved. We have an increasingly ageing population and unless we maintain high levels of our tax-paying workforce, then we shall be in trouble by 2020.We need an influx of migrants that will integrate into our society, into our workforce, into our tax system, into our economic equations. At the same time, we must invest into our infrastructure and resources in order to cope with an increased population.

The answer lies with our politicians, our policies and with our longer-term economic planning. Will we be able to solve the equation? Will we be assured of a future where our lives and our standard of living are of the requisite high level that we have all become accustomed to? Will we be able to show compassion on the one hand but also good long-term planning for our financial stability and survival in the even tougher times ahead?

tragedy |ˈtrajidē| noun ( pl. -dies)
1 An event causing great suffering, destruction, and distress, such as a serious accident, crime, or natural catastrophe: A tragedy that killed 95 people | His life had been plagued by tragedy.
2 A play dealing with tragic events and having an unhappy ending, esp. one concerning the downfall of the main character.
• The dramatic genre represented by such plays: Greek tragedy. Compare with comedy .
ORIGIN late Middle English: from Old French tragedie, via Latin from Greek tragōidia, apparently from tragos ‘goat’ (from the bucolic plays in honour of Dionysus) + ōidē ‘song, ode.’ Compare with tragic.
Posted by Intelliblog at 01:12