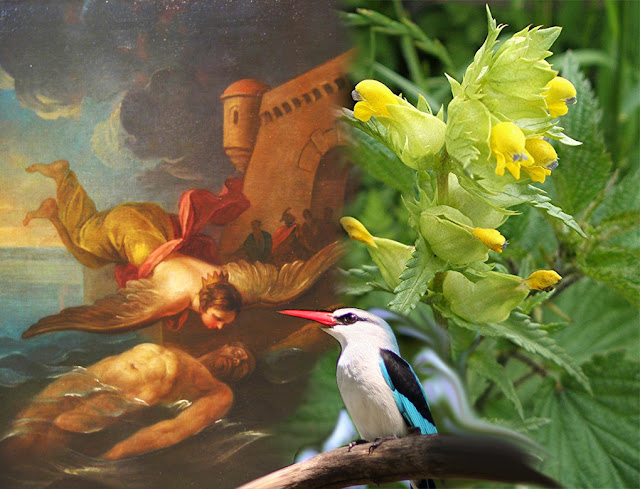 “Sin lies only in hurting other people unnecessarily. All other ‘sins’ are invented nonsense.  (Hurting yourself is not a sin - just stupid.)” Robert A. Heinlein

I had a dinner related to work, to attend tonight and this came after a very busy day. Consequently it was another day of non-stop activity with something happening concurrently. There is a lot to be said about multi-tasking and generally this is what saves me (and the day, in general!).

The yellow rattle, Rhinanthus minor, is the birthday plant for this day.  It symbolises singularity.  It is a lunar plant according to the astrologers.  The church has dedicated the plant to St Peter.

The Halcyon Days are meant to be a few weeks respite from the wintry and typically blustery weather that is seen in this time of the year. The ancient Greeks named these days after Halcyon, a seabird who once was a woman. She was changed into a bird for a transgression but Zeus took pity on the bird when he heard her sad song as she tried to protect her fledglings in a sea storm. He decreed that these weeks before and after the winter solstice should be kind and mild, thus allowing Halcyon preserve her brood from the severity of the winter weather.

There are several Greek myths regarding these days and the birds that traditionally nest and brood during the winter.

Alcyone was daughter of Aeolus and Aegiale. Her husband was king Ceynx, who was very content with his wife and life, and decided this happiness was reason enough for him to call his wife Hera after the Queen of the gods. He also made Alcyone call him Zeus (King of the gods). This of course, angered the gods, and they changed the couple guilty of hubris into birds as a punishment. Alcyone was turned into a kingfisher, or Halcyon, and Ceynx into a Gannet, or Ceyx.

According to another myth Ceynx drowned in a shipwreck during a trip to consult an oracle. This made Alcyone follow him by jumping into the sea. The gods took pity on them, and transformed them into sea birds.  The Kingfisher has its nesting period during the winter solstice, and during the winter months when the weather is calm for a few days, the Greeks say we have “Halcyon days”. The term has become extended to denote any peaceful time or respite in troubled times.
Posted by Intelliblog at 14:41