THE BLIND SIDE - MOVIE MONDAY 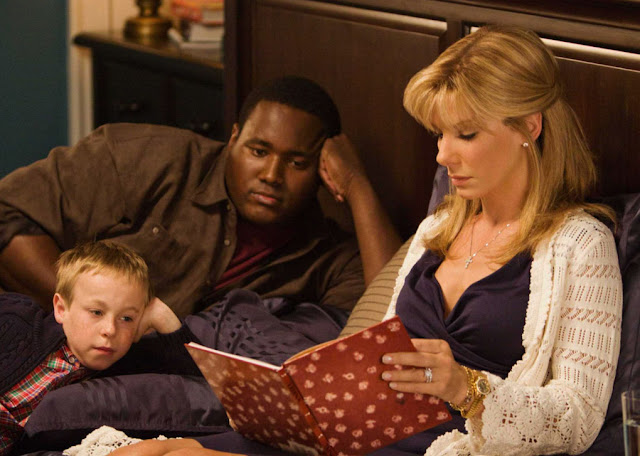 “How wonderful it is that nobody need wait a single moment before starting to improve the world.” - Anne Frank

We watched a stock Hollywood movie at the weekend, which ended up being very good. I didn’t expect it to be much more than standard bilge, but it did have a bit of substance and being based on a true story, was reassuring in the values it highlighted. It was good to see that there are still some good people out there in the world and that they are busy “doing” things rather than “talking” about them. We very nearly didn’t see this film as it had a plot line involving American football, which we do not care at all about (actually we do not care about any kind of football!). However, the blurb on the package somehow struck a sympathetic chord and just as well, because the film was anything but about football…

It was the 2009 (co-written and directed by) John Lee Hancock film “The Blind Side”. The story is about Leigh Anne and Sean Tuohy who take in a homeless teenage black boy, Michael “Big Mike” Oher. Michael’s father is dead and his mother is a drug addict. His education is rudimentary and because he chooses not to speak much, people consider him stupid. However, he is thirsty to learn and thirsty for the love and tenderness of the family he never had.  Leigh Anne who is a Christian woman in deed not only words, takes charge of Michael’s life and ensures that the young man has an opportunity to succeed. When he is involved in football, she helps him, including giving the coach a few tips on how best bring out Michael’s talents. Michael’s life turns around as the family not only help him but accept him as one of their own, even hiring a tutor to help him improve his marks to the point where he would qualify for an athletic scholarship.

“Corny”, you might say. “trite” and “formulaic”. Well, yes, I did say that this was a typical Hollywood film. However, it was a good film and as I said earlier, all the more commendable because it was based on a kernel of truth. There are still people out there who do good, people who live by their principles and who are prepared to their money where their mouth is. I have no time for the proselytising bible bashers, nor the TV evangelists, nor the armchair Christians. A Christian is the person who lives the bible in their life and does Christian deed silently, unobtrusively, without show or hope for recompense or recognition, nor through calculation of pecuniary interest. Or so I hope Michael’s reality was.

Sandra Bullock does an excellent job as Leigh Anne – this is Bullock’s movie really – but also good is Quinton Aaron as Michael. The supporting cast, including Kathy Bates as the (“I’ll tell you a deadly secret: I’m a Democrat”) tutor, Miss Sue, does a good job. Jae Head steals some scenes as the littlest member of the Tuohy clan. They manage to create a feel-good sense about the film, although I can certainly see why some people may find it offensive and racist – far be it from the intention of the film, I think. Condescending it may be occasionally, but racist I think not.

Overall, I would recommend this film as it is an uplifting film an one that tells a story about a person’s potential. It is about faith and love and hope. It is also a film about self-doubt and charity and perseverance. Some may question the motives behind the act of Christian goodwill shown, but I prefer to take it at face value.  Call me innocent.
Posted by Intelliblog at 00:45