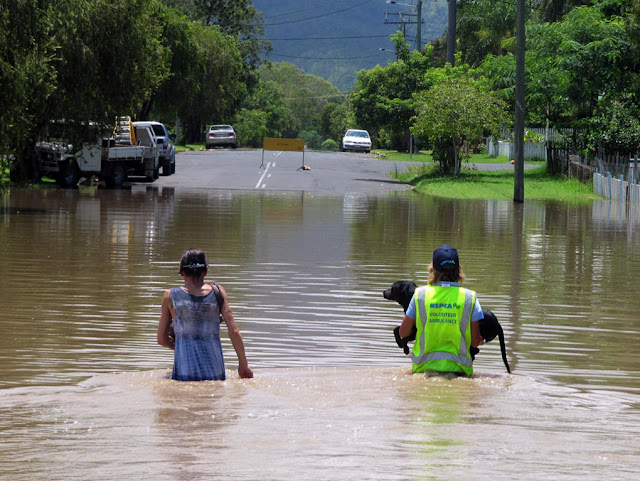 “Adversity is like a strong wind.  It tears away from us all but the things that cannot be torn, so that we see ourselves as we really are.” - Arthur Golden

The situation in Brisbane, Ipswich and Toowoomba is simply heartbreaking. The images and stories that are coming through are sad, distressing, moving, dismal. The plight of thousands of people who have lost everything is devastating. As most of these people have no flood insurance (most insurance companies not offering this type of cover for their properties – or having premiums that are exorbitant), they have literally lost everything. There are stories of people escaping with their lives and the clothes on their back, fullstop… All else was lost.

However, these are the fortunate ones. The official death toll now stands at 15 with 61 people still unaccounted for. There are grave fears held for the 12 people who were washed out of their homes when they were hit by a wall of water in the Lockyer Valley. This is a massive natural disaster and unfortunately, the death toll will climb further as the flood waters recede. A long and arduous clean-up and recovery process will take months, if not years. About 60,000 homes across southeast Queensland are still without power, and an emergency shelter has been set up in the RNA Stadium in Brisbane for people who have had to leave their homes because of the flood.

I am aware of three of our staff who have lost their homes to flood waters, and no doubt as communication channels are re-established there will be more sad stories from our extended family at my workplace. We already had the first donation round at our Melbourne campus where people put money in an envelope for an immediate donation. I am sure that other staff, similar to myself, have made personal donations also. We are also considering a fund raising event for February, which should raise some tens of thousands of dollars, as we raised for the Victorian Bushfire appeal.

As if all that weren’t enough, the Brazilian floods are another tragic occurrence that has claimed hundreds of lives and has caused massive devastation in Rio and São Paulo. Sri Lanka is also experiencing severe flooding and I have just heard on the news that flash flooding is also occurring in the northeastern part of our state, Victoria. It seems that there is “…water, water everywhere and not a drop to drink”! I say that because as the floodwaters recede, a filthy, sewage contaminated sludge is left behind. This not only stinks to high heaven, but also carries billions of bacteria and other pathogens that could cause serious disease in individuals or even the break out of epidemics.

The community spirit and the unity that has been shown buy Queenslanders has been extraordinary and in this they are being ably led by Anna Bligh, the Queensland Premier. Ms Bligh has shown tremendous leadership during the adverse times that her state is going through and with her coal-face approach, good communication strategy, genuine concern and empathy for the tragedy her fellow-Queenslanders are suffering, she is winning friends and providing much-needed support for all those who are going through some very tough times.

Word for the day today is:
adversity |adˈvərsitē| noun ( pl. -ties)
Difficulties; misfortune: Resilience in the face of adversity | She overcame many adversities.
ORIGIN Middle English: From Old French adversite, from Latin adversitas, from advertere ‘turn toward.’
Posted by Intelliblog at 18:20