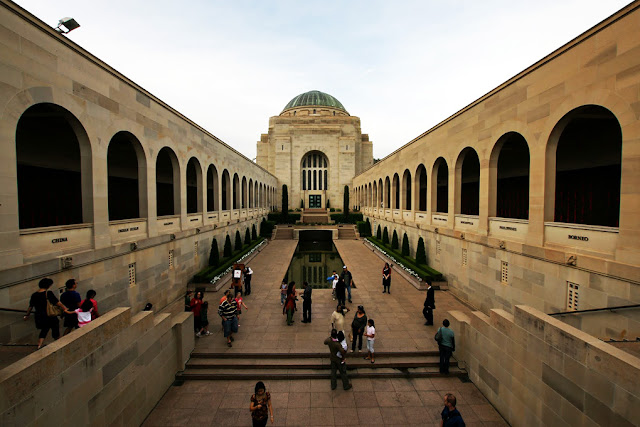 “If a man love the labour of any trade apart from any question of success or fame, the gods have called him.” - Robert Louis Stevenson

I was in Canberra today for work. I’ve had two very productive and successful meetings, but it’s been very much a “fly-in; meet; fly-out” type of day! Canberra must be one of the most ‘interesting’ national capitals in the world, being very small, very utilitarian and completely artificial. As a consequence, not many Australians choose to live there if they can help it, including many of the politicians who come in do their bit of governing and then fly back to their preferred place of residence. It is very much a city of public servants, and its atmosphere as well as its everyday life is rather pedestrian. Definitely not cosmopolitan (despite the foreign presence of the embassies) and definitely not buzzing with life and excitement (despite its ‘capital’ status)!

Canberra has been the capital of Australia since parliament moved there in 1927. It is a city of about 350,000 people and is geographically 150 km from the ocean and 281km SW from Sydney. Canberra is thought to be an Australian Aboriginal name meaning “meeting place” from the Aboriginal word Kamberra. The site of Canberra was chosen as Australia’s capital city in 1908. In 1912, an international architectural design competition was held to design Canberra’s urban living space. Chicago architect, Sir Walter Burley Griffin won the competition.

His vision was to build a city that blended into the bushland and which was designed around several monumental ‘circuits’ with magnificent avenues and vistas allowing for uninterrupted views for kilometres on end. It is a very ‘natural’ city with quite a lot of vegetation, but most international visitors we have take there are rather disappointed, as the bushland is typically Australian and in summer especially, it can look very drab and khaki-coloured. Europeans and Americans are used to the deep green verdant shades of their forests and countryside – not so in Canberra! However, in Spring the city’s parks are transformed into blooming bulb flower gardens and the “Floriade” festival ensures that there are many visitors to enjoy these displays.

In 1963, the Molonglo River was dammed to create a vast artificial lake in the centre of Canberra, aptly named Lake Burley Griffin, in tribute to Canberra’s architect. This lake transformed the landscape and provided a focal point around key structures of the city. It is also a venue for recreational activities such as sailing and looks good in this inland (sometimes very hot!) city. The watersprout is a Canberra landmark as is the Carillon, which is situated on the lakefront and was donated to the people of Australia by Great Britain and dedicated in 1970.

One of the most important and iconic landmarks of the Capital is the Australian War Memorial (http://www.awm.gov.au/). It is a majestic building that looks like a cathedral, a temple, a museum, a mausoleum and a massive cenotaph all rolled into one (see picture above). Visiting this is quite an emotional experience as thousands of dead Australian soldiers are honoured within its shrine. Australia has fought bravely in many wars in distant countries and the toll has been a heavy one for such a fledgling nation. The War Memorial reserves a special place in every Australian’s heart.

The National Parliament (both old and new buildings) is also in Canberra and the new Parliament House is a highly controversial building. It was designed by Mitchell/Giurgola Architects and opened on 9 May 1988 by Elizabeth II, ‘Queen of Australia’. When it was constructed, it was the most expensive building in the Southern Hemisphere and cost over AU$1.1 billion to build. It has 4,700 rooms with many areas are open to the public. The House of Representatives chamber is decorated in green while the Senate chamber is decorated in red. Separating the two chambers is the Members’ Hall, which has a water feature and is not open to the public. The Ministerial Wing houses the office of the Prime Minister and other Ministers. It is definitely worth a visit.

One of my meetings today was a working lunch, which took place in the Verve Café and Bar in Manuka (read “Maá-naa-ka”), an inner suburb of Canberra. I had a chicken Caesar Salad, while my companion had the pumpkin risotto. The latter was apparently very good but the Caesar was definitely not up to Melbourne standards! The lettuce, dressing, ‘bacon’ (=strips of ham!) and croutons left much to be desired, while at least the chicken and the… egg were very nice. I did not mind overly much as the meeting went very well, as did my morning and afternoon meetings!

Nevertheless, it’s so good to be home for the weekend!
Posted by Intelliblog at 00:39