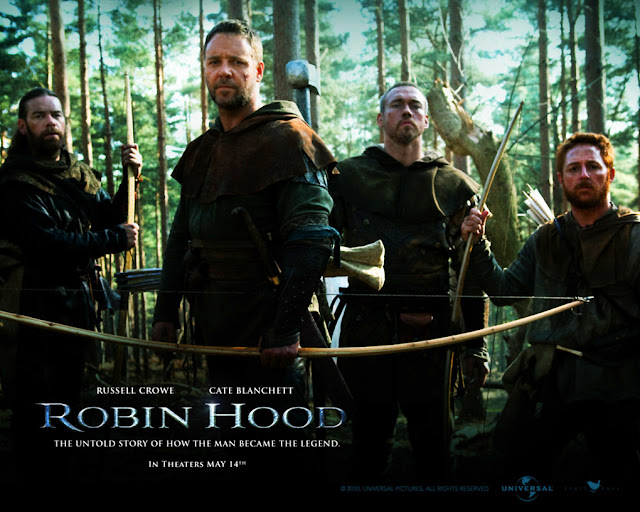 “It is only in adventure that some people succeed in knowing themselves - in finding themselves.” – André Gide

We had the opportunity to sit and watch Ridley Scott’s 2010 version of “Robin Hood” at the weekend. I hadn’t heard much about this film, but I rather winced when we sat to watch it, as I thought to myself: “Oh, no, not another ‘Robin Hood’ film!”. However, when I read the DVD jacket, I was interested. Firstly, the cast was rather stellar with Russell Crowe in the title role, Cate Blanchett as Marian, Max von Sydow as a Lord of the Realm, William Hurt as the King’s adviser and Mark Strong as the bad guy (no, not the Sheriff even though a weasely sheriff is well played in a minor role by Matthew Macfadyen!). Good actors do not necessarily make a good film, although they can salvage a mediocre one. The other thing that interested me was that this seemed to give a completely different slant to the Robin Hood legend (as perhaps best illustrated in the classic Errol Flynn film of 1938 “The Adventures of Robin Hood”).

The movie was definitely not disappointing and if you like big Hollywood epics in the mould of “Braveheart”, “Rob Roy”, “The New World”, etc, you will enjoy this movie. It is quite formulaic in many ways, but it done well in that genre, and I guess Ridley Scott’s direction is important in that respect. In period movies like this, I always look for details that will either make the look and feel of the movie convincing or not. For example, looking at the hands of people who are meant to be farmers – yes they are dirty and gnarled with broken, dirty fingernails; looking at the architectural and decoration details – farmhouses having trodden earth floors with no reeds strewn on, while a castle having flagstone-paved floors that are strewn with reeds or sweet flag; fabrics – no they did not have lurex in the middle ages!

The film is very much a prequel and this is immediately obvious form the very first few bits of introductory on-screen blurb. We are told in no uncertain terms that we will see how the legend of Robin Hood began. King Richard dies in a battle in France, and archer Robin Longstride, along with Will Scarlett, Alan-a-Dale and Little John, all make their way to England. They encounter the dying Robert of Locksley, whose party was ambushed by treacherous Godfrey, who hopes to lead a French invasion of England. Robin promises the dying knight he will return his sword to his father Walter in Nottingham. When Robin meets Walter and delivers his son’s sword, Lord Walter encourages him to impersonate his dead son to prevent his land being confiscated by the crown, and he finds himself with Marian, a ready-made wife. The evil Godfrey worms his way into the king’s service as Earl Marshal of England and brutally invades towns under the pretext of collecting Royal taxes. Robin is embroiled in curbing this treacherous plot and leading the defence against the French invasion.

Yes, it is all stirring stuff, but there is humour in it as well, and some pathos, as well as an interesting subplot concerning a group of poaching children living in Sherwood forest off the land and through petty theft (they reminded me of “The Lord of the Flies” somewhat). We liked the cinematography, the music and general look of the film. Blanchett did a good job of playing Marian, while Russell Crowe was a very earthy Robin Hood. An excellent performance by veteran Max von Sydow as the blind father-in-law of Marian.

The film has prepared the way for a sequel with the “proper” adventures of Robin Hood this time round. There are unsettled accounts between Robin and the Sheriff of Nottingham and there are also some loose ends left from this film to be resolved in the sequel. Overall, we enjoyed it and we recommend it as a good Saturday afternoon matinee movie!
Posted by Intelliblog at 14:14