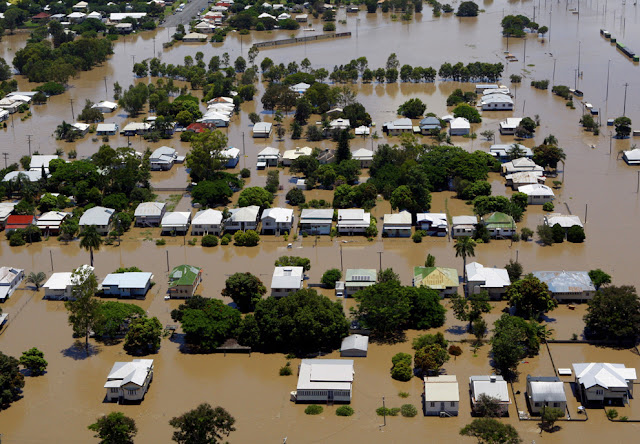 “In prosperity, our friends know us; in adversity, we know our friends” - John Churton Collins

The flood crisis in Queensland has worsened in the last 24 hours with many flash floods affecting more areas of Queensland that are already suffering, but also now causing havoc in Brisbane, a city with a population of two million. This afternoon we had to close our Brisbane Campus as a precautionary measure. There was no public transport, chaos on the roads, incessant rain, lightning, thunder, and many low-lying areas of the City near the river, already underwater. All the staff and students were sent home in view of the increasing risks, as well as the potential of flooding affecting the campus.

At this stage, nine people are dead and 66 still missing as a result of the flash floods that affected Toowoomba and the Lockyer Valley. In the Brisbane CBD, the overflowing Brisbane River is in the process of converting some of the city streets to canals and residents are fleeing in a panic. The situation in Brisbane and Ipswich is very serious and residents are now facing their greatest threat and toughest test in more than 35 years. This is the worst flooding since both of these cities were devastated again in 1974. The Brisbane City Council predicted 6500 homes and businesses across 80 suburbs will be inundated over the next few days, and about 16,000 properties will be partially affected by floodwaters. Brisbane’s main dam, which had so far protected the city from flooding, was full and authorities now had to release water, which would send even more flood waters into Brisbane.

Rockhampton in the North of the State (about 612 km north of Brisbane) has already been hard hit, with flood waters having reached their peak about a week ago. The Fitzroy river that was slowly submerging the town peaked at just under 10 metres above its normal level, having inundated up to 40% of the town. This is the worst flood in the state of Queensland in 50 years, with floodwaters covering total areas equivalent to the areas of France and Germany together!

As Queensland is one of Australia’s prime exporters of coal and the floods have seriously hampered the operation of the coal mines, the Australian dollar has fallen to tits lowest level in the last few weeks, as there is expectation that the Australian economy will take a hiding and will require months to return to normal. Billions of dollars damage has already been caused by the floods and there is more damage expected.

The rest of the East coast of the country is also experiencing wet conditions and even here in Melbourne we have had rain, which will continue for the next few days. La Niña has a definitely hold over weather conditions in the Pacific rim. It seem strange than not too long ago we were suffering from the deadly bushfires here in Victoria and now in Queensland we have floods of biblical proportions.

Once again the Australian spirit has risen to the occasion and helping hands are being extended to the stricken areas from all over the country. Emergency services, volunteers, donations, industry support and neighbours helping each other in communities are all rising to the aid of affected people and doing the best a community can do in critical situations like this. Adversity generally brings out the best in people and here in Australia we are used to seeing great self-sacrifice, a soaring community spirit, altruism, charity, support and cooperation. One feels proud in moments like these to belong to a community such as this where the best of what being a human is being displayed.

Perhaps it is also apt at this stage to say “Thank you” to all of the volunteers and emergency personnel who are doing so much to help the affected areas and people. This is in keeping with “International Thank You Day” today.

If you wish to help the flood-ravaged communities please donate!
Posted by Intelliblog at 21:15