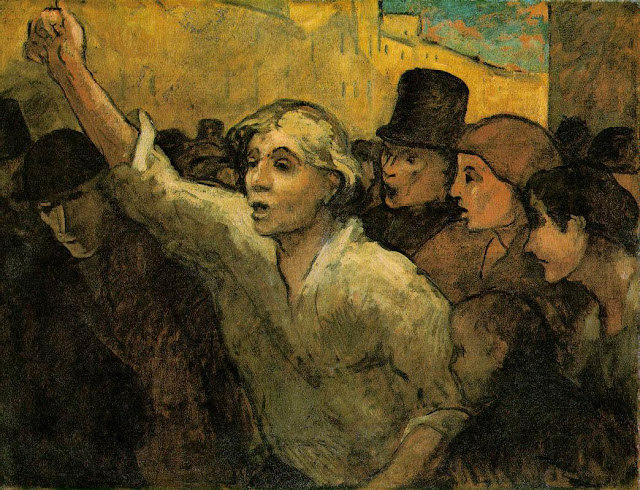 “Promise yourself to live your life as a revolution and not just a process of evolution.” - Anthony J. D'Angelo

It is the anniversary of the birth of Honoré Daumier, (1808-79). He was a French caricaturist, painter, and sculptor, who in his lifetime was known chiefly as a political and social satirist, but since his death recognition of his qualities as a painter has grown. Daumier’s paintings were probably done mainly fairly late in his career. Although he was accepted four times by the Salon, he never exhibited his paintings otherwise and they remained practically unknown up to the time of an exhibition held at Durand-Ruel’s gallery in 1878, close to his death.

The paintings are in the main a documentation of contemporary life and manners with satirical overtones, although he also did a number featuring Don Quixote as a larger-than-life hero. His technique was remarkably broad and free. As a sculptor he specialized in caricature heads and figures, and these too are in a very spontaneous style. In particular he created the memorable figure of “Ratapoil” (meaning `skinned rat'), who embodied the sinister agents of the government of Louis-Philippe. A similar political type in his graphic art was “Robert Macaire”, who personified the unscrupulous profiteer and swindler.

In the directness of his vision and the lack of sentimentality with which he depicts current social life Daumier belongs to the Realist school of which Courbet was the chief representative. As a caricaturist he stands head and shoulders above all others of the 19th-century. He had the gift of expressing the whole character of a man through physiognomy, and the essence of his satire lay in his power to interpret mental folly in terms of physical absurdity. Although he never made a commercial success of his art, he was appreciated by the discriminating and numbered among his friends and admirers Delacroix, Corot, Forain, and Baudelaire. Degas was among the artists who collected his works.

Here we see one of his iconic paintings, “The Uprising” (ca 1860). The work is oil on canvas, 87.6 x 113 cm, and to be found in Phillips Collection, Washington D.C, United States of America. It is characterised by Daumier’s revolutionary politics and typifies the social commentary that his oeuvre displays. Daumier was the artist of the lower classes, the malcontents and the underprivileged. The artist has chosen to depict a public uprising, with masses of people marching in the streets. A charismatic figure, spotlit as it were, leads the crowd and his hand is raised in defiance. His open white shirt and determined face, chanting some slogan of rebellion is captured with a directness and immediacy that places the viewer in the thick of things. It is reportage in painting, as well as art as propaganda…
Posted by Intelliblog at 00:58