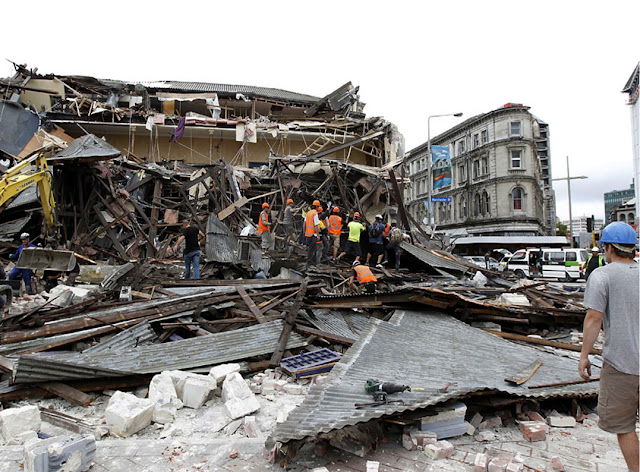 Unfortunately, this time scores of fatalities have been reported at several locations in the centre of the city with one person confirmed dead in the suburb of Sumner. Witnesses have also reported watching horrified as were people crushed by falling buildings. Two buses have been crushed and the cathedral spire was completely destroyed. About 20 people are reported trapped in high rise building and firefighters are desperately trying to rescue survivors trapped by debris. All airports and airspace in New Zealand have been shut down. Police have called in the defence forces to help evacuate trapped residents and the entire CBD.

The survivors were panicking, crying and shouting while trying to avoid the debris, the cracks in the ground and the clouds of dust, the fires, the gushing water from damaged pipes. The city still raw from last year’s earthquake is once again experiencing the might of Enceladus and we know that some of the survivors were not so lucky this time round. Many eyewitnesses have described the horror and it once again highlights how the might of nature can overwhelm us and reduce us to powerless puppets that can be crushed in the hands of an angry puppetmaster.

Unlike the previous earthquake last year, this tremor caused such a heavy toll as it occurred at lunchtime when Christchurch was at its busiest. The mayor of New Zealand’s second-biggest city says at least 200 people are believed trapped under rubble. Immediately after the tremor, people could be seen wandering the rubble-strewn streets in distress.Police said that among the dead were people on two buses which had been crushed by falling buildings. Officials said up to 30 people were feared still trapped inside the Pyne Gould Guinness building, where screams have been heard from beneath the wreckage. Power and telephone lines were knocked out, and pipes burst, flooding the streets with water. The suburbs of Lyttleton and New Brighton are reportedly “unliveable”.

Many of our staff are New Zealanders or have family there and it is inevitable that they will have been affected, some in a very immediate and personal way. It was good to hear that our Prime Minister immediately pledged Australia’s support and help during this terrible time. I have visited Christchurch several times and it was one of my favourite New Zealand cities. The 300,000 strong city was a picture of serenity and elegance with its wonderful people full of joie-de-vivre and friendliness. That is has now been reduced to this devastated, warzone-like appearance is unthinkable. To think that 65 people are already confirmed dead and that unfortunately more are to be discovered is terrible…
Posted by Intelliblog at 22:10