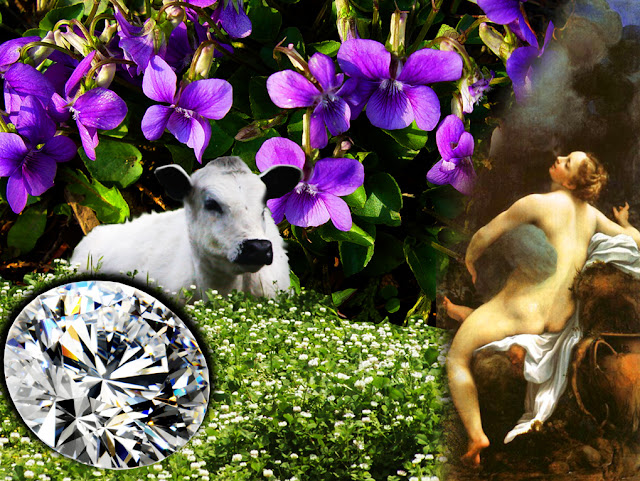 “The secret of staying young is to live honestly, eat slowly, and lie about your age.” - Lucille Ball

If it is your birthday today, you are in good company! Here is a list of some famous people also born on this day:

The blue violet, Viola odorata, is today’s birthday flower.  It symbolises love and faithfulness.  The plant in Greek mythology supposedly sprang from drops of blood shed by Ajax, one of the valiant Greek warriors of the Trojan War.  The ancient Greeks called the violet, ion, after Io, one of the loves of Zeus. Hera, Zeus’s wife, became very jealous when she discovered this affair and Zeus turned Io into a heifer so that she could escape Hera’s wrath.  Io fed on violets when she had been turned into a heifer.  Astrologically, the violet is under the dominion of Venus and the sign of Aries.

The Arian may be summarised with the verb: “I am”.  They are pioneers and trendsetters, go-getters and daredevils who know what they want and are sure of their abilities.  An Arian quote: “I want what I want and I want it when I want it!”

The Sun in Aries represents new beginnings. The Arian is full of enthusiasm and creative energy and is ready to apply this energy to initiate new enterprises. Never intimidated by failure, they are always ready to overcome obstacles and seek new challenges. These people have a strong desire to lead the way for others, finish first, and prove themselves more through actions and deeds than through words. They rarely give up things they have started and it is not unusual to find Arians amongst the explorers and adventurers.

The Arians are energetic and restless, generally excelling in sports and games.  They will rarely put up with situations that irritate them either in work or personal life.  As they are often uncompromising, their partners will need to yield.  When provoked the Arian can be violent, aggressive and argumentative. However, the anger is soon dissipated and grievances do not last long.  In love, the Arian can be possessive, jealous and faithful, often idealistic.

Leadership and challenge are what the Arian excels in and under a well-placed birth chart, these people will direct their energy to useful enterprises in which their courage and good sense will prevail with beneficial and fruitful results. Creativity is often neglected as the Arian is too busy and too active with other interests.  Dull routine is not for these people and in their career they engage in trendsetting activities, explore new areas, and develop original ideas.  The Arians abhor people getting in their way and they can be ruthless in achieving their aims.

The birthstone for April is the diamond.  The name of the gem is derived from the Greek adamas, meaning “unconquerable”, referring to the extreme hardness of this gemstone. The pure clear fire of the diamond is unmatched by any other stone.  Very expensive diamonds may also be coloured yellow, pink or blue. It is identical to graphite in composition, but is crystalline, thus formed under extremes of pressure and heat.  South Africa is the world’s most famed producer of beautiful diamonds, often of a large size.

Happy Birthday!
Posted by Intelliblog at 22:55