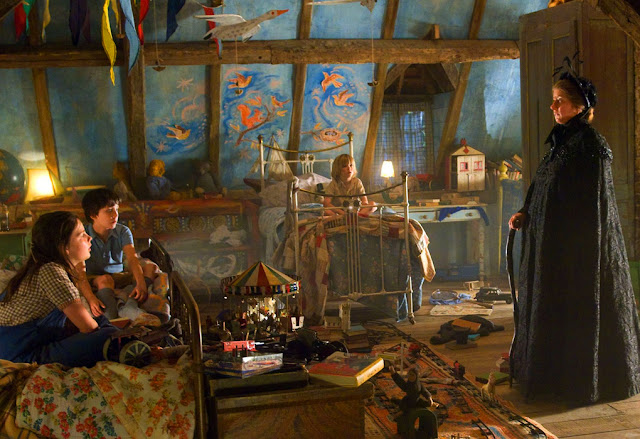 As we were babysitting for a little while at the weekend, we watched a kids’ movie, which certainly pleased our young charge, but also left the grownups quite amused. It was a sequel, the 2010 Susanna White movie “Nanny McPhee and the Big Bang”. The first film in the series was the 2005 “Nanny McPhee" directed by Kirk Jones. In both cases, the talented Emma Thompson not only stars in the film, but also has written the screenplay, based on characters in the Christianna Brand books, where Nurse Matilda is the equivalent Nanny. The films have as their foundation a governess who uses magic to rein in the behaviour of the naughty children in her charge. Along the way she teaches them valuable life lessons and with each lesson learnt, her hideous face becomes a little more beautiful. This of course is not a new plot, as one may remember the Mary Poppins series of children’s books by P.L. Travers. Once again a magical nanny comes into a troubled household, not wanted but needed, to put it right and leave just when she is no longer needed, but wanted.

This particular episode is set in England at the time of WWII, in the countryside. Nanny McPhee appears to help out a farmhouse family where the father is at war. The mother (Maggie Gyllenhaal) is under pressure to sell the farm to her nasty brother-in-law (Rhys Ifans), a ne’er-do-well who will not rest till he gets his way in order to repay his gambling debts. Meanwhile the children’s snooty, upper crust, spoilt London cousins come to stay in order to avoid the bombings in London.   Nanny McPhee deals with all problems calmly and teaches the children five important lessons.

The cinematography is beautiful and the special effects engaging. One of the highlights of the film is the synchronised swimming piglets (look out Esther Williams!), while quite amusing is Nanny McPhee’s pet blackbird with the eating problem. The music is light-hearted and suited to he action, the children play well, while an added bonus are supporting role parts by Maggie Smith, Ewan McGregor and Ralph Fiennes.

The film has some sensitive themes that are dealt with light-heartedly, yet not dismissively nor off-handedly. Particularly poignant is the warm, loving relationship of the children with their absent father, while the cousins’ relationship with their divorcing parents provides a contrasting counterfoil. The confrontation between Cousin Cyril (Eros Vlahos) and his soldier father (Ralph Fiennes) in the War Office in London is particularly touching. The final scene containing a link between the first film and the sequel is very plaintive as it gets the viewer to reflect on childhood versus old age, with the indomitable, ever-capable and magical Nanny as the link.

This is a very entertaining film which I recommend for children of all ages, and if possible try to watch the first film before the sequel. Both are very good and will appeal to very young children as well as older ones. There are enough adult references to keep the movie appealing enough for grown-ups and both movies are excellent family fare. Well done, Ms Thompson!
Posted by Intelliblog at 22:46