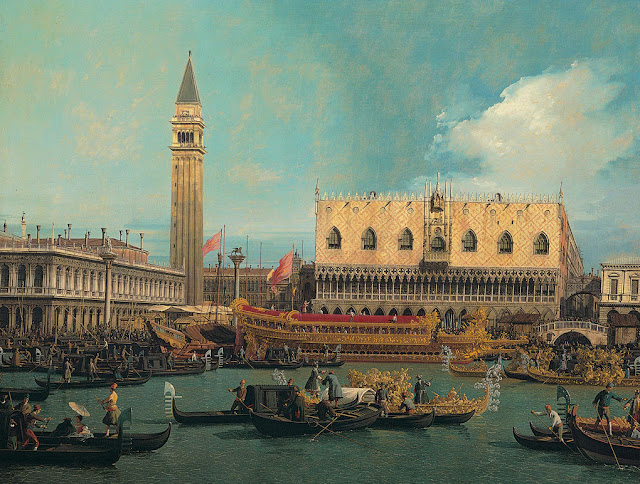 “Venice is like eating an entire box of chocolate liqueurs in one go.” - Truman Capote

Rococo, which is also referred to as “Late Baroque” is an 18th century style which developed as Baroque artists gave up symmetry in their works. Their style became increasingly ornate, florid, and playful. Rococo rooms were designed as total works of art with elegant and ornate furniture, small sculptures, ornamental mirrors, and tapestry complementing architecture, reliefs, and wall paintings. It was largely supplanted by the more severe and simple Neoclassic style.

In 1835 the Dictionary of the French Academy stated that the word Rococo “usually covers the kind of ornament, style and design associated with Louis XV’s reign and the beginning of that of Louis XVI”. It includes all types of art produced around the middle of the 18th century in France. The word Rococo is seen as a combination of the French rocaille, meaning stone, and coquilles, meaning shells, due to reliance on these objects as motifs of decoration.

Italian Rococo was mainly inspired by French Rococo, as France was the founding nation of Rococo. The styles of the Italian Rococo were very similar to those of France. The style in Italy was usually lighter and more feminine than Italian Baroque art, and became the more popular art form of the settecento. The leading artistic centres during the Rococo in Italy were Venice, Genoa and Rome. Most Italian Rococo artists came from Venice, such as Canaletto, Tiepolo, Guardi, Piazzetta and Bellotto, but also from Rome and Genoa, such as Piranesi and Pannini. Artists such as Castiglione and Magnasco brought the vogue of Rococo art to Naples, and Neapolitan Rococo was mainly based on landscapes and naturalistic themes. Canaletto and Tiepolo were possibly one of the greatest rococo painters of all time, and they painted many frescos and cityscapes (particularly Canaletto).

Giovanni Antonio Canal (1697 – 1768), known as Canaletto, was born in Venice, the son of a theatrical scene painter. He was very influential, famed for his precisely depicted and evocative views of the city (“vedute”). He found that providing formulaic paintings for tourists was very lucrative. These, still highly skilled works, were produced by him often in collaboration with an organised workshop. They usually record the lavish Venetian public ceremonies, as in “Regatta on the Grand Canal”.

Canaletto was favoured by English collectors. He visited England repeatedly between 1746-56, painting works like “Eton College”. His most important assistant was his nephew Bellotto, who became an accomplished artist. Canaletto often made meticulous preparatory drawings. He may have used a camera obscura for topographical accuracy in creating some of his designs, but he always remained concerned with satisfying compositional design, not simply slavishly recording views.

Here is Canaletto’s “The Bucintoro at the Molo on Ascension Day” painted circa 1732. It is an oil on canvas painting, part of the Royal Collection, UK. It is typical of his Venetian “vedute” and a perfect souvenir for a young gentleman after completing his “grand tour” that had included famous Venice. One can imagine it afterwards hanging in pride of place in some dark grey but noble house, reminding the nobleman of his wild oats sowing in sunny Italy…
Posted by Intelliblog at 11:02