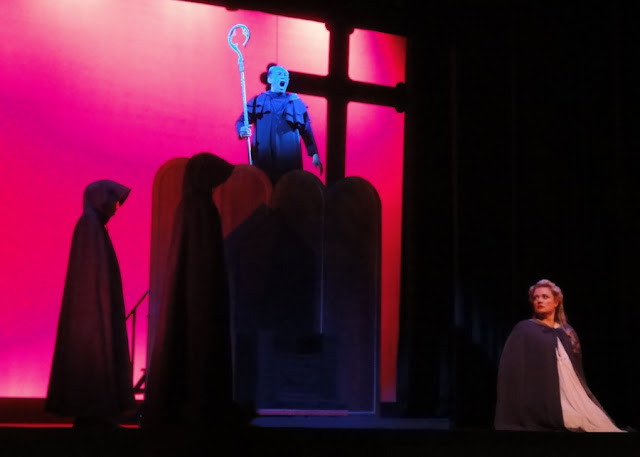 “An opera begins long before the curtain goes up and ends long after it has come down. It starts in my imagination, it becomes my life, and it stays part of my life long after I’ve left the opera house.” - Maria Callas

It is said that Opera is the queen of arts as it combines so many different types of artistic expression to create a unified whole that is seen in the performance on stage. When you think about it, there is music (both its composition and performance), singing, dancing, acting, stage design, costumes, lighting, special effects – to mention a few of these creative forces at work. It is an art form that is highly stylised and admits no middle ground, you either love it or you detest it. Its followers can get as passionate about it as a football fan is about his team and players. Its detractors cannot understand what all the fuss is about and what all that caterwauling on stage is meant to be.

Opera appeals to me as it is a magical mirror of life and its vicissitudes. The way that it presents our common experiences and shared emotions, feelings, and the way that we all react to certain situations can prove to be a powerful insight into our innermost being. And of course the music makes it all so much more immediate and can strip naked our emotional reserve and make us very vulnerable to the stimuli that reach us in that darkened auditorium. The setting draws us in and the highly artificial environment of the stage acts as a lens to focus emotions quite sharply and make us participate in the drama taking place. How easy it is to then find parallels with our own life and experiences…

Of course even the most ardent opera fan has some favourite operas and some that are not all that sympathetic to one’s sensibilities. I particularly dislike Puccini’s “La Bohème” but I like his “Madam Butterfly”. “Carmen” and the “Pearl Fishers” of Bizet are perennial favourites of mine, as are most Verdi operas, with (perhaps surprisingly) the exception of “Aida”. The aria “Celeste Aida” grates on my nerves so much! Mozart’s operas are wonderful as are Rossini’s. “Norma” of Bellini and “Don Pasquale” of Donizetti I like, but Wagner’s music dramas are not my cup of tea. Gluck’s reformed classical style is appealing and his masterpiece “Orfeo e Euridice” strikes a chord with me.

Most baroque operas are firm favourites, with Monteverdi’s “Orfeo” and “L’ Incoronazione di Poppea” ranking very highly. Handel’s operas are wonderful, as are those of Purcell, including the marvellous “Dido and Aeneas”. Rameau’s “Les Indes Gallantes” is a firm favourite, as are some of Cavalli’s operas, for example, “La Callisto”.

Yesterday we went to see one of our favourite operas, “Faust” by Charles Gounod. It was staged by the Melbourne Opera Company in the Athenaeum Theatre. “Faust” is one of the most popular operas in the repertoire and it is perhaps easy to divine the reason. The music is absolutely delicious and there are many well-known arias and choruses, including Marguerite’s famous “Jewel Song” and “The King of Thule”, Mephistopheles’ “Golden Calf” and “Serenade”, Faust’s “Salut demeure” and Valentin’s “Even Bravest Hearts may swell”. The “Soldiers’ Chorus” and the famous Waltz are recognisable tunes by even the non-opera buff person in the street.

“Faust” is adapted from Goethe’s magnum opus of the same name, the story of which he took from German folk tales and various historical tidbits. Both play and opera tell the story of Dr Faust’s pact with the Devil to regain his lost youth in order to experience love and pleasure – things he did not sample while engaged in his “serious” life work on philosophy. The object of his love is the innocent Marguerite, who falls in love with him deeply and purely. A prime character in the work is Mephistopheles, a personification of the Devil, who aids Faust to win the heart and affections of Marguerite. The debauched girl is destroyed by her affair with Faust, who not only abandons her once she is with child, but who also kills her brother. Faust is damned, but Marguerite achieves ultimate salvation.

It is a powerful story and although Gounod has sets it in the conventional manner of a 19th century French composer, the emotional power of the music is quite amazing and its popularity since its first performance attests to the genius of the composer. The full opera (with obligatory Act V ballet) is rarely performed nowadays, perhaps a pity as the ballet contains some gorgeous music and is a showpiece for some phantasmagorical stagecraft. Acts IV and V were conflated in the production that we saw, with what some opera purists may say is a result of tighter dramatic punch and no balletic distractions.

Melbourne Opera Company Ltd was founded in 2002 as a non-profit public arts company dedicated to producing opera and associated art forms at realistic prices. It is a company committed to the development of young artists, regional touring, and having dealings characterised by openness and transparency. The Board is elected annually by the financial membership, which is open to all. Repertoire and casting decisions are taken by an arms-length artistic subcommittee. Melbourne Opera is now second only to the national company as the most active opera company in the country (Australian Opera being the foremost, obviously). This result has been achieved relying mainly upon philanthropic support.

Melbourne Opera Company believe that open competition between opera companies is healthy, providing opportunities for future excellence and greater choice for audiences. In contrast, Berlin, a city smaller than Melbourne, has three major companies as well as a number of smaller houses. Melbourne Opera is active in broadly promoting the art of opera, and works to co-ordinate seasons and subscriptions between all Melbourne opera managements.

The production of “Faust” that we saw yesterday was quite good, although there were some weak areas, understandable perhaps as there were many substitute singers rather than the full original cast. Michael Lapina as Faust did a fairly good job in the male lead role, although on a couple of occasions his notes were shaky. Yang Liu as Valentin was perhaps the weakest of the singers, his notes not hitting true on more than a couple of occasions. Top honours go to Lee Abrahmsen as Marguerite who shone in this demanding role not only with her beautiful singing but also with her impressive stage presence and good acting. An excellent Mephistopheles was sung and acted with gusto by Eddie Muliaumaseali’i whose sonorous bass was satisfying musically and provided a firm anchoring point for many a scene.

Considering the chorus comprises mainly an amateur force, they did a good job of the demanding and powerful choral pieces that form a showcase for this opera. The famous waltz provided an opportunity for a pretty mini ballet around a maypole (a little clunky here and there), while the soldiers’ chorus was perhaps a little understated. Greg Hocking conducted very well and managed to evince a good orchestral sound from his instrumental team that were crowded together in the small orchestra pit. For a group that doesn’t play together often, this orchestra managed to produce a cohesive and professional sound for this difficult, magnificent score. A hooded organist in one of the side-stage boxes and the celestial chorus from upper circle were appreciated by the audience in a theatre that provided good acoustics in a rather intimate way.

The stage settings and lighting were a little disappointing, but one must remember that the Athenaeum is a small theatre and the opera company is a small one. However, a few touches of imagination would have made the settings so much better. Costumes were for the most part good although a few here and there were disappointing (Bacchus’ body suit was lamentable).

Overall we enjoyed ourselves and it is great to see our own Opera company tackling such an epic work in a spirited and courageous manner. True to its mission statement, this company provided a very good quality entertainment at an affordable price. Melbourne is the artistic capital of Australia and stage musicals, opera and plays are always in demand by a discriminating and refined audience. Melbourne Opera’s success in this city is testimony to its talented and committed personnel and artists.
Posted by Intelliblog at 12:08