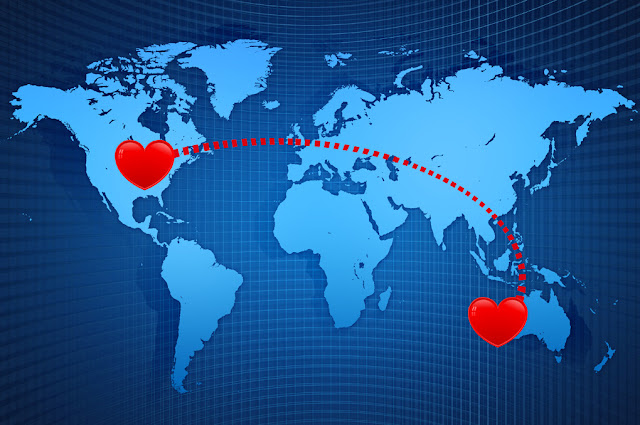 “In true love the smallest distance is too great, and the greatest distance can be bridged.” - Hans Nouwens

The internet has revolutionised our life in all sorts of ways. Communication, entertainment, education, publishing, networking, commerce, business, etc, etc, etc. However, the internet is also a major way that we socialise and meet potential partners. The virtual environment is conducive to rapid exchanges of intimate details and many people utilise the electronic medium to find their “perfect” match. Numerous “matchmaker” sites exist and they range from the casual “clip-joint” type of site where one-night stands are arranged to the genuine relationship-building sites where the object is a match that leads to marriage or other long-term arrangements.

Matchmaking of course is nothing new and in many traditional societies quite a large number of marriages are the result of the efforts of specialist matchmakers. It is perhaps not surprising that most of these marriages are very successful and last a lifetime long. An astute matchmaker seeks individuals who are well-suited, socially, physically and intellectually, and who share similar values and can communicate effectively with one another. Love is given every opportunity to flourish in such matches. The specialist skills of the matchmaker who gets to know a very large number of available singles and does a “best-match” exercise can be a very effective way of building a successful and long-lasting relationship.

The ease with which we communicate through the internet and the large variety of online forums that make meeting your “perfect” match more likely explain the popularity of this medium when one is searching for a mate. The electronic medium can provide a “safe” environment for frank discussions where people may exchange candid disclosures about all sorts of things: Politics, religion, sex, prejudices, music, books, sports, hobbies, etc. One may then find a partner with whom one shares much and can communicate with on a non-physical level.

The problem in many cases is that with the reduction of the world into a global village through the wonders of the world-wide-web, one’s perfect match may live in Outer Mongolia or the permafrost of Lapland, while one is happily ensconced in the tropical paradise of Vanuatu. The dilemma then is, where to go with this budding relationship? Long distance love affairs do not last the distance, but a new survey has shown that Australians are not daunted by geographical separation. This is of course nothing new in this vast land of ours, which is so far away from the rest of the world!

A survey of 120,000 Australian singles showed that about a quarter of respondents would have no qualms in packing up and moving to a new location in order to find love. Moving interstate or even overseas was not unreasonable for 27% of people asked, and 54% said that they would relocate if the person they were to join was the “right” one. Those who had never been married before were more likely to move than those who had married before and single men were more willing to move than single women to join their soul mate. In Australia, Northern Territorians were the ones most likely to move so as to be with their love, while on the other side of the coin, South Australians were the most loathe to do so. The survey also compared Australians to a similar survey done in the US and it found that Australians are 12% more likely to move for love than Americans!

Internet romances need caution and often people are disappointed, but I am also aware of some very successful matches made on the net. Distance can be a problem but the course of true love never ran smooth. It seems that if the chemistry is right, distance is no object for the determined couple…

LDR noun, abbrev.
Long-Distance Relationship: An intimate relationship that takes place when the partners are separated by a considerable distance. In 2005, according to The Center for the Study of Long Distance Relationships, an estimated 2.9% of US marriages were considered long-distance, with 1 in 10 marriages reported to have included a period at long distance within the first 3 years. This means that in 2005 approximately 3.5 million people in the US alone were involved in long-distance marriages.
Posted by Intelliblog at 02:59