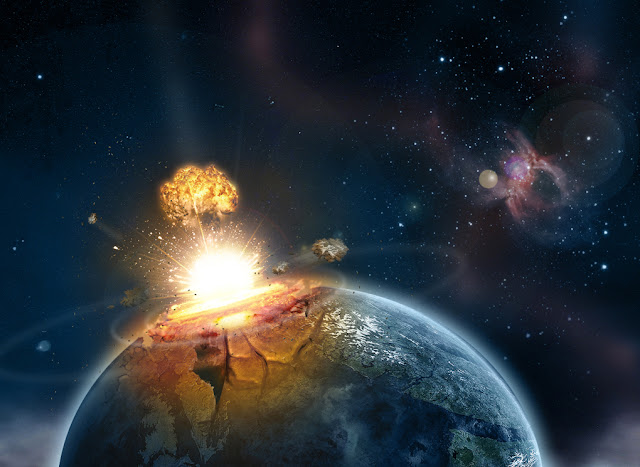 “Science fiction films are not about science. They are about disaster, which is one of the oldest subjects of art.” - Susan Sontag

Yesterday we had a near miss with an asteroid that came dangerously close to the earth. The name of the object is 2011 MD and fortunately it flew by harmlessly but at the terribly close distance of only 12,000 kilometres (a hair’s breadth in astronomical terms!), which is 32 times closer than the moon, and closer than geosynchronous satellites. Astronomers in the Southern Hemisphere were able to spot the asteroid with fairly modest telescopes as a fast moving bright spot. Though this celestial object came close, it is not a distance record holder. Earlier this year, a tiny asteroid flew by even closer - within 5,500 kilometres of the earth’s surface.

Asteroid 2011 MD is 10 metres long and was discovered last week by telescopes in New Mexico. Scientists say asteroids this size sail past Earth every six years. If 2011 MD did hit us, then it would more than likely break up in the atmosphere and give us an amazing display of fireballs and meteors. Quite a light show! It is unlikely that an object as small as this would cause grave effects. However, asteroids larger than 25-30 metres are more likely to impact the ground and have more serious consequences (depending also on where the impact occurs – an asteroid impacting in Paris will have different effects to one hitting the middle of the Pacific Ocean).

There are about 8,100 Near-Earth Objects (NEO) that have been discovered and about 827 of them are asteroids with a diameter of approximately 1 km or larger. About 1,236 of these NEOs have been classified as Potentially Hazardous Asteroids (PHAs). NASA currently plans to launch a probe to visit one of these PHAs and return samples of the asteroid to Earth. That mission will launch the OSIRIS-Rex asteroid probe in 2016 to rendezvous with the space rock 1999 RQ36 in 2020. The target asteroid is 580 metres wide and has a 1-in-1,800 chance of hitting Earth in the year 2170, and a 1-in-1,000 chance of slamming into us in 2182.

2011 MD was part of a group of Earth approaching asteroids called “Apollo Class”, which regularly crosses the orbit of the Earth and thus has a slight but noticeable chance of striking Earth. Not every asteroid approaching Earth is quite as benign as 2011 MD has proven to be. About two years ago, asteroid 2009 DD45 which was 61 metres long, approached us and had it struck Earth, it would have been with the force of a nuclear blast, similar to the presumed object that fell on Siberia in 1908, causing an air burst in the multimegaton range, flattening 25 square kilometres of forest. One of the largest Apollo asteroids, named Geographos, was discovered in 1951. Geographos is several kilometres in diameter. A strike on Earth by an asteroid the size of Geographos would be an extinction level event on the scale of the object that destroyed the dinosaurs. Looking at the near future, we still have the threat of asteroid Apophis to deal with, which is looming ever closer, a possible impact occurring on April 13, 2036.

In Egyptian myth, Apophis was the ancient spirit of evil and destruction, a demon that was determined to plunge the world into eternal darkness. This seemed to astronomers a fitting name for the asteroid hurtling towards Earth from outer space. Apophis is 350 metres long and was discovered in 2004. Scientists are ever since monitoring its progress and have discovered that this asteroid is on a potential collision course with our planet.

NASA estimates that if Apophis impacts earth, it would release more than 100,000 times the energy released in the nuclear blast over Hiroshima. Thousands of square kilometres would be directly affected by the blast but the whole of the Earth would see the effects of the dust released into the atmosphere. Astronomers are imploring governments to decide on a strategy for dealing with this event, in a case of reality imitating art – the art in this case being science fiction movies!

Scientists initially put the risk of impact of Apophis at 1 in 233, which is almost a certainty in cosmological terms. Subsequent studies upgraded the probability to 1 in 43. However, refined studies, more accurate measurements and some serious number crunching led to a downgrading. As of October 7, 2009, the odds of an April 13, 2036 impact have been reduced to about 1 in 250,000. So you can sleep soundly tonight!
Posted by Intelliblog at 22:49