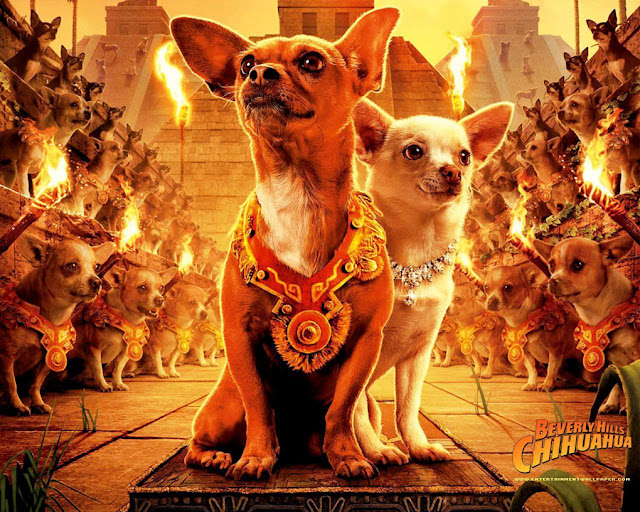 “We long for an affection altogether ignorant of our faults. Heaven has accorded this to us in the uncritical canine attachment.” - George Eliot

Occasionally when scraping the bottom of the “specials” basket at the DVD shop one may find a film that one will get, albeit one that one would never have considered getting at full price. Such was the case with a movie that we saw at the weekend. The only reason we got it was because of sentimental value… We used to own Chihuahuas and they were both beautiful dogs with a wonderful temperament. Hence seeing a movie with two chihuahuas on its cover brought back memories and we got it to watch. It was Raja Gosnell’s 2008 “Beverly Hills Chihuahua”,  produced by the Disney studios. As such, one could immediately tell this was produced for the children/family market and one’s expectations are immediately toned down somewhat.

It is interesting how many children’s picture books, novels, films and TV series are being made in recent years. It seems that ever more and more are being produced and there is quite a vast array of very ordinary stuff out there. However, the market niche is a lucrative one and it always amazes me to see young children or even babies in the back of four-wheel drive cars, with eyes transfixed to the TV monitor, watching on DVD some children’s show or another. No matter how short the trip the DVD is an easy solution for keeping kids occupied and quiet. Needless to say that at home the TV and DVD player are always on the go and kids tend to spend more and more time exposed to this form of entertainment. Very much unlike my childhood where TV was always live and strictly rationed – a privilege not a right.

The worst offenders nowadays are the inane animated series that take silly ideas and elevate them to the heights of absurdity. For example, karate-practicing (and suitably dressed) dinosaurs that fight on the side of good trying to overcome the forces of evil as exemplified by sabre-wielding alien bird-like predators in space suits, or some such bilge. The premise is outlandish, the plots repetitive and mind-rotting, and the whole quality of production low and nasty. These types of shows are produced on conveyor-belt types of establishments and are preparing the young viewers for the adult brainless equivalent, the daily soap opera.

One thing about Disney movies in the past was the relatively high standard of production, the use of classic stories and fairy tales as the starting point and the strong “messages” or “morals” that they had embedded within them. These features aligned themselves with most of the classic children’s literature in this respect, where the object of the story was to not only entertain, but to also play a role in shaping young minds so that they were edified and cultivated in some positive way. In recent times, more and more children’s literature and films are produced mainly for entertainment and may in fact have quite a opposite effect to educating or raising the moral, spiritual, and intellectual level of their audiences. Perhaps this is considered old fashioned now, and to actually have such a goal may be looked upon with impatience, cynicism and disapproval.

“Beverly Hills Chihuahua” is one of the latest breed of Disney films (pardon the pun!). This is not based on any classic story or fairy tale and it is a live action film not an animated feature. It does grant dogs anthropomorphic characteristics and they do talk to one another as people do, sharing in this respect elements with similar works in children’s literature: “The Wind in the Willows”, “Aesop’s Fables” and “Winnie the Pooh” for instance. One can see that the prime purpose of this film is entertainment (and entertainment of children mainly), however, it does retain that underlying morality mentality, and it is a vehicle for edification. The plot revolves around Chloe, the Beverly Hills Chihuahua of the title, who is a spoilt, pampered pooch complete with designer clothes, expensive jewellery, and a lifestyle to equal that of rich and famous humans. Her owner, Vivian, leaves on a business trip and her niece, Rachel, is left to dog-sit Chloe. Rachel is a party girl and decides to join with her two friends to go to Mexico, for a vacation. Chloe wanders off, is dognapped and finds herself in an illegal dog-fighting establishment. She is rescued by Delgado, an Alsatian who will help her get back to Beverly Hills. The man who runs the dogfights finds out that Chloe is worth a kingly ransom and he sends his Doberman, Diablo, after her. Rachel, and Vivian’s Mexican landscaper, Sam, and his chihuhua, Papi who is in love with Chloe, are on the hunt to find her and get her home safe and sound.

The plot is thin and the moral lessons are delivered with a sledge hammer, however, one should constantly remind oneself that this is a movie aimed at young children and primarily made for entertainment. Along the way, some important messages are given, more or less effectively, generally not very subtly, but at the same time in a comic manner making the moral pill easier to swallow perhaps. Rachel’s prejudice against the Mexican “gardener” is an example that is held up for ridicule. Chloe’s pampered lifestyle contrasted with the homeless street dogs is a warning against the loss of one’s true value systems when one is endowed with riches. Chloe’s return to her “national” and “racial” roots in Chihuahua, Mexico where she meets a colony of proud Chihuahua warrior dogs and learns to bark, is a lesson in the virtue of never forgetting your roots and being proud of your heritage. It all has a happy end of course and everyone gets their just desserts.

It is a fun movie for young children and the parents may enjoy watching along with their offspring, while doing a cryptic crossword perhaps. We enjoyed the Mexican settings, which were picture postcard perfect and idealised – well-suited to a fantasy world as portrayed in the film and any dog-loving person will adore the pooches, even spoilt Chloe. True to formula, the dog voices are provided by some well-known actors including the likes of Drew Barrymore (Chloe), Andy Garcia (Delgado), Plácido Domingo (Monte), George Lopez (Papi). The music score by Heitor Pereira is unobtrusive and appropriate while the direction is conventional and unobjectionable. A sequel was made based on the success of this movie (cost $20 million, $94.5 million gross February 2009 in the USA).
Posted by Intelliblog at 11:46