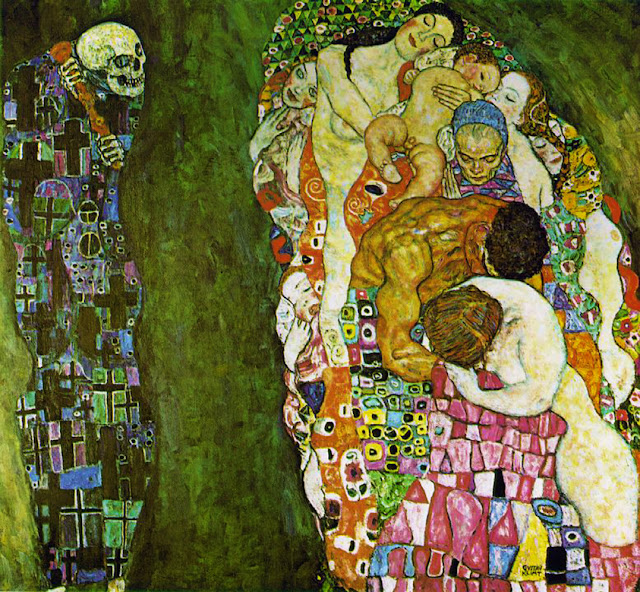 “A museum has to renew its collection to be alive, but that does not mean we give up important old works.” - David Rockefeller

We are currently being regaled with a special exhibition at the National Gallery of Victoria in Melbourne. We are very proud of our gallery, easily the best in Australasia, and I would even be presumptuous enough to say the best in the Southern Hemisphere, in terms of its breadth of coverage, richness of the collection and the significance of its art pieces. Not to mention its excellent curatorship, its constantly expanding collection and the extremely good conservation work that is always being done. Add to that regular special exhibitions from all over the world and you have a world-class gallery!

The current special exhibition of note is the “Vienna: Art & Design” exposition. It looks at the period of about 100 years ago, when a group of radical young artists and thinkers in Vienna, Austria, broke all the rules and created a new wave of creativity. The exhibition at the NGV explores this amazing period, bringing together some 300 works by the greatest Viennese artists of the early twentieth century. Four of them are especially well-represented: Artists Gustav Klimt and Egon Schiele, and architects Josef Hoffmann and Adolf Loos who were central to this artistic revolution, known as the Vienna Secession. Their work transformed Vienna into a modern and forward-looking metropolis at the forefront of new and often shocking ideas that created controversy and revitalised art.

Gustav Klimt is the most well-known and approachable of the group as his paintings are colourful, rich in pattern, pleasing to the eye, yet still startle with their originality and their grandiose scale in terms of subject matter and breadth of concept. Gustav Klimt was born on July 14, 1862, in Baumgarten, Austria, the second seven children, the son of a poor jewellery engraver. At the age of fourteen he entered the University of Plastic Arts in Vienna and it was there that he discovered and began to develop his talent as an artist. He graduated from this the University at the age of twenty, at which time he had been commissioned to create several decorative works, making use of his training in modernist craftsmanship.

At that time he founded the Künstlercompanie (Company of Artists) studio with his brother Ernst, and Franz Matsch, a fellow student. The three found much success as mural painters, obtaining contracts from museums, theatres, and contracting other decorative artwork from wealthy patrons.  The company eventually ceased to exist, following the death of Ernst, and a falling out with Franz Matsch. During his years as a decorator, Klimt finely honed his personal style, which was a product of his artistic training, and the engraving skills his father had taught him. Klimt’s paintings often included gold and silver paint, metal, and ceramics, and as much attention was given to ornamental details as to their subjects. Very few of Klimt’s paintings were done on canvases, as he preferred to paint murals.  Klimt also found inspiration in Byzantine mosaics, which he discovered while exploring Vienna.

In 1897, Gustav Klimt took an interest in politics and rallied other artists to found the Vienna Sezession (Secession), an Art Nouveau movement whose goal was to give young, innovative artists a chance to get exposure, and to revolt against the conservative attitudes of the academic art world. He organised several exhibits, attracting thousands from around the world to view their revolutionary art, and even published “Ver Sacrum”, a monthly magazine about the movement and its artists.  His own personal style came to represent the movement's aesthetics, and in 1902, he painted the “Beethoven Frieze”, a mural for the Sezession building.

In 1905, following a series of disagreements with other members of the Sezession several others left the group, and formed a new association called the Kunstschau (Art Show). Klimt’s most famous painting, “The Kiss”, was created between 1907 and 1908, but it is still associated with the Sezession.  Klimt was a very popular artist, but he was also quite controversial.  He was renowned for his womanising, and often used prostitutes as models.  Many of his works were considered too sensual for the mores of early 20th Century Vienna, and even his more historical, or mythical works featuring nudes were often criticised for being too erotic.   Fortunately, the scandals only served to heighten Klimt’s international recognition, if not his notoriety.

Klimt often travelled to the outskirts of Vienna, and to Italy where the countryside inspired him, particularly autumnal landscapes, which showed the rich golden hues of his own decorative designs.  From the opulence of the Viennese Bourgeoisie to the mythological, from eroticism to the simple beauty of nature, Klimt’s artwork always maintained its highly stylised feel, but what remains one of its most fascinating traits is that while concentrating on the superficial, its depth cannot be ignored.

In 1917, he was made an honorary member the Viennese Academy of Fine Arts. On January 11th of the following year, at the age of 55, Gustav Klimt suffered a stroke while working in his apartment.  Weakened from the stroke, and suffering from pneumonia, he died less than a month later, on February 6th, 1918.

The painting above is “Death and Life”, which in 1911 received first prize in the world exhibition in Rome. It typifies in many ways Klimt’s work in that it juxtaposes colourful, flat decorative elements reminiscent of enamelwork, Byzantine mosaics and art nouveau tilework, with rounded lush forms of human figures and voluptuous females. The canvas is divided into two uneven areas by a green expanse, which could just as easily be a tree trunk as it could be a field or a grave, covered with grass. The larger part of the canvas is devoted to life with women of all ages occupying pride of place, the muscular male and the baby boy almost tokenistic afterthoughts. The women exemplify Klimt’s fascination with the female body and his fixation with sex and pleasure. The smaller part of the canvas on the left depicts death as a skeletal figure lying in wait ready to strike, seemingly at any one of the figures on the right. Death wears the garb of religion, the numerous crosses on the patterned cloth disguising his bones with priestly vestments. The message is clear, life is a bacchanalian orgy, where the “old” religions of the sensualist polytheism hold sway, while death is associated with the Christian religion, laden with sin, guilt and divine wrath.
Posted by Intelliblog at 01:47