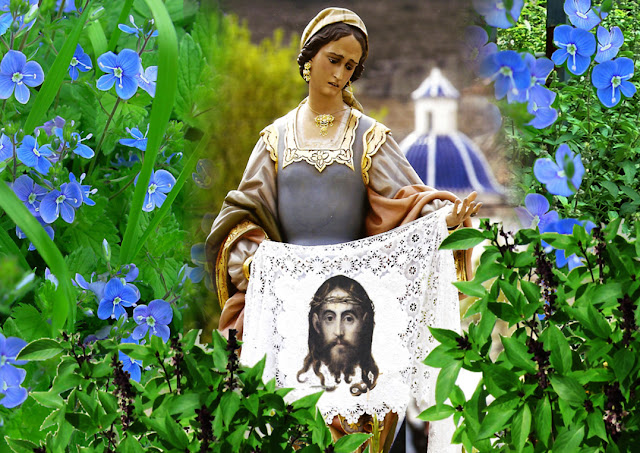 “A man’s interest in a single bluebird is worth more than a complete but dry list of the fauna and flora of a town.” - Henry David Thoreau

This day’s birthday flower is sweet basil, Ocimum basilicum. It signifies hatred for the other sex (misogyny if you are male and misandry if you are female!), and also poverty. Basil is from the Greek basilikos, meaning “kingly” or “regal”. Astrologers classify it under the sign of Scorpio and basil is ruled by Mars. It used to be said that if a woman was given a sprig of basil and the herb died quickly as she held it, she was “light of love” and of questionable morals.

Legend tells that this day was declared by the archangel Gabriel as the luckiest of the year. Healing, planting, building houses, beginning travels or even declaring wars were all thought to be crowned with success if they were begun on this day.  Children born on this day were supposed to be clever, able scholars and enjoy great wealth.

Today is also St Veronica’s feast day. She was a pious matron of Jerusalem who, during the Passion of Christ, as one of the holy women who accompanied Him to Calvary, offered Him a towel on which he left the imprint of His face. She went to Rome, bringing with her this image of Christ, which was long exposed to public veneration. To her likewise are traced other relics of the Blessed Virgin venerated in several churches of the West. The belief in the existence of authentic images of Christ is connected with the old legend of Abgar of Edessa and the apocryphal writing known as the "Mors Pilati". To distinguish at Rome the oldest and best known of these images it was called vera icon (true image), which ordinary language soon made veronica. By degrees, popular imagination mistook this word for the name of a person and attached thereto several legends which vary according to the country.

In Italy tradition has Veronica coming to Rome at the summons of the Emperor Tiberius, whom she cured by making him touch the sacred image. She thenceforth remained in the capital of the empire, living there at the same time as Sts Peter and Paul, and at her death bequeathed the precious image to Pope Clement and his successors.

In France she was said to be given in marriage to Zacchaeus, the convert of the Gospel, whom she then accompanied to Rome, and then to Quiercy, where her husband becomes a hermit, under the name of Amadour, in the region now called Rocamadour. Meanwhile Veronica joined Martial, whom she assisted in his apostolic preaching.

In the region of Bordeaux Veronica, shortly after the Ascension of Christ, is said to have landed at Soulac at the mouth of the Gironde, bringing relics of the Blessed Virgin; there she preached, died, and was buried in the tomb which was long venerated either at Soulac or in the Church of St. Seurin at Bordeaux. Sometimes St Veronica has even been confounded with a pious woman who, according to Gregory of Tours, brought to the neighboring town of Bazas some drops of the blood of John the Baptist, at whose beheading she was present.

Speedwell, Veronica chamaedrys, is the flower dedicated to St Veronica. Speedwell, is a roadside plant with masses of pretty blue flowers that “speed you well”. In Ireland, a bit of the plant was pinned onto clothes to keep travellers from accidents.
Posted by Intelliblog at 22:42