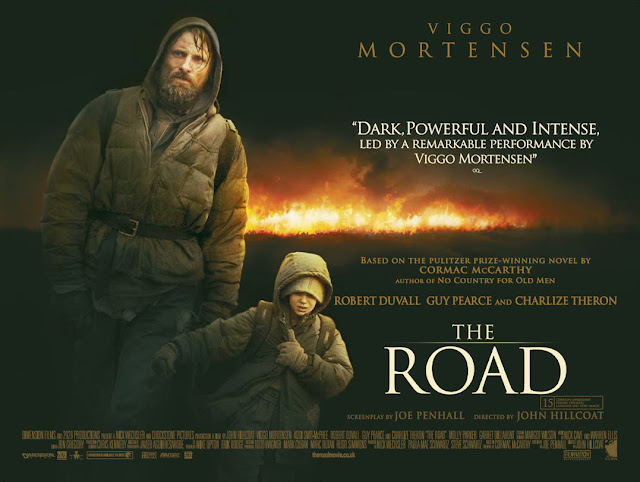 “Only after disaster can we be resurrected.” - Chuck Palahniuk

Yesterday we watched John Hillcoat’s 2009 movie of the Pulitzer Prize-winning Cormac McCarthy novel “The Road”. This is a challenging film and it is not easy to sit and watch it as it confronts us with ideas that we may have thought about, but quickly banished from our mind as they are too horrible to entertain.

The plot revolves around a Father and his Son who walk through a devastated USA. This is a grim tale set in a post-apocalyptic world where destruction has been wrought on an unimaginably huge scale. We are never made aware of what the destruction is due to, nor is it important to the plot. No living thing moves in the despoiled landscape and all that is left is ruined cities, burnt trees, ash drifting in the wind, gray skies, dirty snow, and gashed earth. Other survivors roam the ravaged land in lawless cannibalistic bands that will hunt other weaker humans as prey. The Father and Son are the “good guys” and they retain enough of their humanity to starve slowly rather than be reduced to the same barbaric state as the cannibals. The duo walk towards the warmer south, although there is no guarantee that anything better awaits them there. They have nothing except a pistol with two bullets to defend themselves, the ragged, dirty clothes they are wearing, a dilapidated shopping cart of scavenged food, and each other.

A quote from the book: “The clocks stopped at one seventeen. There was a long shear of bright light, then a series of low concussions. I think it’s October but I can’t be sure. I haven’t kept a calendar for years. Each day is more gray than the one before. It is cold and growing colder as the world slowly dies. No animals have survived, and all the crops are long gone. Someday all the trees in the world will fall. The roads are peopled by refugees towing carts, and gangs carrying weapons, looking for fuel and food…

Within a year there were fires on the ridges and deranged chanting. There has been cannibalism. Cannibalism is the great fear. Mostly I worry about food, always food. Food and the cold and our shoes. Sometimes I tell the boy old stories of courage and justice, difficult as they are to remember. All I know is the child is my warrant, and if he is not the word of God, then God never spoke.”

The film is amplified by some flashback scenes of a pre-apocalyptic paradise when the Boy’s Mother was alive and life was good and full of sunshine and nature verdant. But overall, this is a bleak and distressing film that paints a disturbing picture of a future that may well eventuate before not too long: Whether it is destruction by a massive, accelerated climate change, a nuclear winter, an asteroid impact, world-wide warfare or a shift in the earth’s orbit, the dire fate that may await mankind is an appalling scenario that we should be aware of. The psychological state of the survivors is the focus of the film. All of the spectrum of responses to a mind-destroying apocalyptic end of the world are explored: Suicide, cannibalism, scavenging, madness, the self-preservation instinct. More than all of these the film is a paean to the bond between father and son and the love a father has for his child.

Viggo Mortensen and Kodi Smit-McPhee play the main roles and overall, their acting is very good, with the chemistry between them just right. Charlize Theron as the Mother puts in a  cameo role as a woman cracking under the strain of the world collapsing around her and her last poignant scene is a haunting one. Robert Duvall playing an elderly wanderer does much with his short scene and his world weary survivor’s senility is a good foil for the innocence of the young boy who pities him.

The film forces us to examine our lives and question ourselves as to what is really important to us. What could we lose and still manage to survive, what do we need to have left to go on fighting? What more would we need to lose in order to finally give up and let ourselves go? Different characters in the film have answered these questions differently and we see the contrast between the weak and the strong, the “good guys” and the “bad guys”. We ask ourselves to what extent we would go in order to preserve our lives, but perhaps more importantly the lives of those we love. At what point does our instinct of self-preservation overcome our humanity? When does selfishness overcome altruism? What need happen in order for us to revert to our ancestral animal instincts and the barbarism of the uncivilised beast?

One of the brightest and most hopeful of scenes in the movie was towards the end when the man and the boy find a beetle in a thrown away can. Their astonishment and delight as the beetle flies away is a ray of sunshine in their otherwise gray world. The shimmering of the wings of the beetle as it flies is the only sign of life and a promise of a future recovery.

The film is worth seeing, but it does take some work to be actively engaged by it. There was some poignancy in the film, but strangely enough I did not get drawn emotionally into it. I watched as a detached observer might do, but it was hard to be really moved by it. The situations were perhaps rather contrived, the development too slow, the plot too predictable, the action too laboured. A friend of ours has read the novel and has the highest regard for it, but refuses to see the movie. An acquaintance has read the novel and has seen the movie and liked the movie better. Perhaps I should read the novel myself and make up my own mind…
Posted by Intelliblog at 04:25