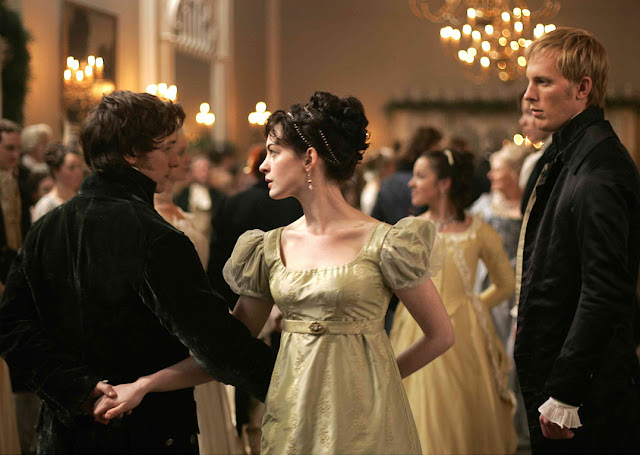 “Romance has been elegantly defined as the offspring of fiction and love.” - Benjamin Disraeli

On Sunday, the weather started turning a little nasty in the afternoon and we decided to stay in and watch a film. This was a film that was once again retrieved from the specials bin at our DVD store and which we had missed seeing previously. It was the 2007 Julian Jarrold film “Becoming Jane” with Anne Hathaway and James McAvoy. It is about the youthful years of Jane Austen, before she became a famous novelist. It revolves around her supposed romance with a young Irish lawyer. This is another “chic flick” manufactured in a fictional biographical style by the screenwriters Kevin Hood and Sarah Williams, based on fragmentary references in some letters that Jane Austen wrote her sister, Cassandra.

The plot begins in 1795 when Jane Austen was a vivacious 20-year-old living in the country and making do with her rather impecunious family circumstances in the household of her father, a parson. She is an emerging writer who sees the world through young, romantic eyes and having an idealised vision of marrying for love, something that was then almost unthinkable. Her parents wish her to marry “upwards, into money” so that her life will be assured and her social status will be improved. Mr. Wisley, nephew to the very rich local aristocrat Lady Gresham, foots the bill as the prospective match, especially since he eyes Jane with amorous glance.

Jane, however, meets the young Irishman, Tom Lefroy who has been sent to the countryside by his crotchety uncle, Judge Langlois in order to punish one of his indiscretions. Lefroy is roguish, intelligent, non-aristocratic and depends solely on his uncle’s generosity to live. Jane and Tom are initially repelled by mutual antipathy, with sparks flying as sharp repartee and witty ripostes are exchanged. His arrogance raises Jane’s ire, but his intellect, worldly ways and experience attract her. The couple begin to flirt, which flies in the face of the mores of the age, and are soon faced with a terrible dilemma: If they marry, they will risk everything that matters - family, friends and fortune, whereas if they do the “right thing” and follow the advice of their relatives, they will lose the chance of being together and enjoying their love.

Historians and Jane Austen biographers have howled blue murder: The film is historically inaccurate and at best highly speculative and unsubstantiated. At worst it is downright erroneous and historically untenable. It must be stressed that the screenwriters didn’t have much historical material or evidence to work from. A couple of letters written by Jane Austen to her sister Cassandra, and an admission by an elderly Tom Lefroy that he had once been in “boyish love” with the writer are what have spurred the screenwriters to concoct the plot. Historian Jon Spence worked as a consultant on the film and has written a book of the same name, which probably should be read for homework before one sees this film. Spence gives attention to the inspiration he feels Lefroy gave to Jane, but this inference is developed into actual events in the movie.

Hence, on slightly shaky foundations, the film-makers have built a story of repressed passion and defiance of social mores that is a work of fiction worthy of a Jane Austen novel in its own right. Hollywood tends to take such liberties with fiction and biography according to Hollywood holds a terror that would make many a famous personage’s bones shake in their grave. That considered, one must then decide whether this fictitious biopic works as a movie.

It is a handsome film with a strong sense of atmosphere, many an authentic touch in terms of mise-en-scène and quite gorgeous cinematography. The music adds a nice touch and the costumes, little details in terms of the curtseying, the representation of the customs and language of the times are well captured. The two leads are likeable enough, although neither of them is a favourite actor of mine. They do perform their roles well enough, but I had the feeling that it was all contrived. There was no naturalness in their performance. A little a like a dated theatre performance, perhaps.

The story was rather predictable and quite unoriginal, the gimmick being the fame of the author and the temptation to treat her life as if it were one of her own novels. I found some scenes exceedingly soppy and melodramatic, dragged down by clichés. However, all of that said, one must admit that the film is not worthless and is engaging enough to be seen to the end. It is no masterpiece of the cinematic art and understandably, it did not win a “Best Screenplay” Oscar. It is a good enough B-grade movie, certain to appeal to the romantically inclined, maybe even to fans of Jane Austen’s work.
Posted by Intelliblog at 02:08