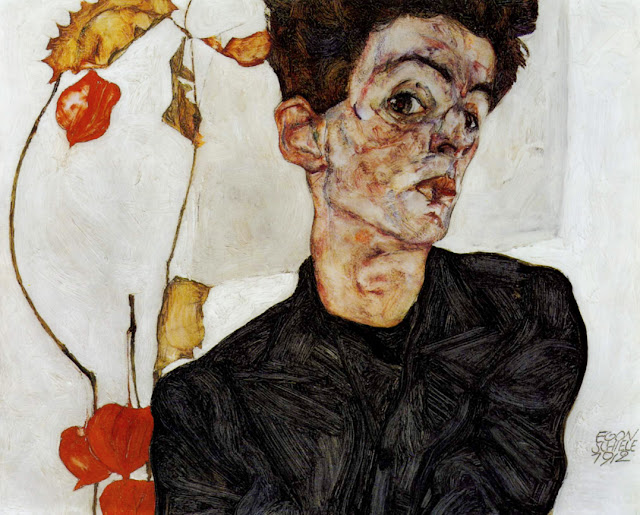 “Obscenity is not a quality inherent in a book or picture, but is solely and exclusively a contribution of the reading mind, and hence cannot be defined in terms of the qualities of a book or picture.” - Theodore Schroeder

Continuing my Vienna Art & Design blog from last week’s Art Sunday, I am considering today another artist of Klimt’s circle, Egon Schiele (1890-1918). Schiele was one of the prime artists that created art in the expressionist style. Expressionism developed almost simultaneously in different countries from about 1905. This is generally regarded as a northern European development of the Fauves’ celebration of colour, which was extended by a push to new emotional and psychological depths.

This was art characterised by symbolic colours, great contrast and exaggerated imagery. German Expressionism in particular tended to dwell on the darker, sinister aspects of the human psyche. In its broadest sense, this expressionist art raises subjective feelings above objective observations. The paintings reflect the artists’ state of mind rather than the reality of the external world. The German Expressionist movement began in 1905 with artists such as Kirchner and Nolde, who favored the Fauvist style of bright colours but also added stronger linear effects and harsher outlines.

Although Expressionism developed a distinctly German character, the Frenchman, Georges Rouault (1871-1958), linked the decorative effects of Fauvism in France with the symbolic colour of German Expressionism. Rouault’s work has been described as “Fauvism through dark glasses”. Rouault was a deeply religious man and some consider him the greatest religious artist of the 20th century. He began his career apprenticed to a stained-glass worker, and his love of harsh, binding outlines containing a radiance of colour gives poignancy to his paintings, which show a resemblance to stained glass.

Austrian expressionist artist Egon Leo Adolf Schiele, born June 12, 1890, died October 31, 1918, provoked art critics and society for most of his brief life. Even more than Gustav Klimt, Schiele made eroticism one of his major themes and was briefly imprisoned for obscenity in 1912. His treatment of the nude figure suggests a lonely, tormented spirit haunted rather than fulfilled by sexuality. At first strongly influenced by Klimt (whom he met in 1907), Schiele soon achieved an independent anticlassical style wherein his jagged lines arose more from psychological and spiritual feeling than from aesthetic considerations. He painted a number of outstanding portraits, such as that of his father-in-law, Johann Harms (1916; Solomon R. Guggenheim Museum, New York City), and a series of unflinching and disquieting self-portraits. Late works such as The Family (1918; Oesterreichische Galerie, Vienna) reveal a newfound sense of security.

In this “Self-Portrait with Physalis” Schiele’s characteristic style is shown to the foremost. It was painted in 1912 (oil, opaque colour on wood. 32.4 x 40.2 cm, located in the Leopold Museum, Vienna, Austria). The white of the background highlights the curving lines of the Chinese Lantern plant stems and their striking orange fruit and autumnal leaves, while providing a high contrast background for the face. The bust of the artist is off-centre and his quizzical, slightly bemused look with raised eyebrows is hard to fathom, although one can see the trials and tribulations of his young life. Schiele is looking at us with a challenging, yet vulnerable, wide-eyed face – this is the year he was imprisoned for obscenity and one can see the querulous eyes, state: “Obscene? Why?”. His dark hair mirrors his coat and his arms appear to be pressed tensely against his body, his hands (although not shown), one can imagine clasped tightly. His young face is tortured and its colours appear make-up-like, as if we are looking at a grease-painted mask. This is an expression of the artist’s angst-filled soul rather than a true objective likeness of his external appearance. The portrait makes the viewer uneasy and curious, while at the same time exciting a sense of empathy and a need to explore further, beyond the stems of the physalis.
Posted by Intelliblog at 13:24