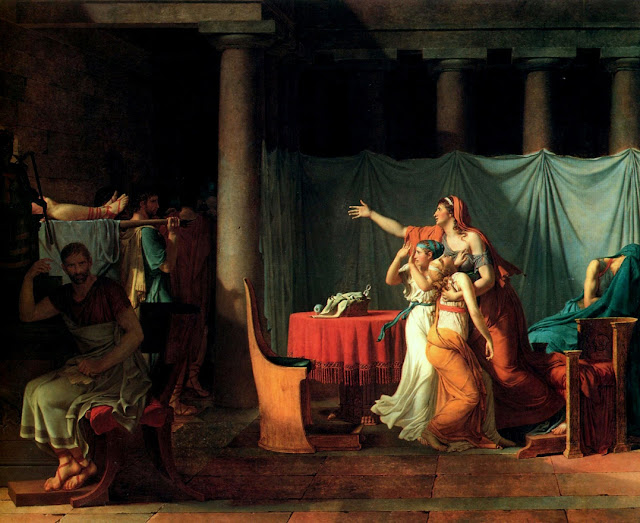 “Indeed, history is nothing more than a tableau of crimes and misfortunes.” - Voltaire

For Art Sunday today, a painting by Jacques-Louis David: "The Lictors Bring to Brutus the Bodies of His Sons". This is a large painting Oil on Canvas, about 3m by 4m, painted in 1789 and now exhibited in the Musée du Louvre, Paris.

The full title of this work is “Brutus Returning Home after Having Sentenced His Sons for Plotting a Tarquinian Restoration and Conspiring against Roman Freedom; the Lictors Bring their Bodies to be Buried”. Having led the fight which overthrew the monarchy and established the Roman Republic, Brutus tragically saw his own sons participate in a plot to restore the monarchy. As a judge, he was called upon to render the verdict, and unhesitatingly condemned his own boys to death.

In bringing up such a topic in 1789, David generated hot controversy, and reveals how deeply committed the artist was to the new ideas and enlightenment principles of the French Revolution. Had the revolution not occurred, this picture would almost certainly never have been exhibited publicly. But in the exciting days following the fall of the Bastille, David’s picture was seen as a republican manifesto, and greatly raised the artist’s reputation.  The picture’s influence was immediately felt in other ways, including taste, fashion and even morals.

A commentator noted: “After it was exhibited, fashion returned to hair without powder and women adopted loose hair styles, soon to be followed by men... Corsets were banished, as were high-heeled shoes and women got into the habit of replacing so-called court dresses by light and simple clothes, which were more elegant than sumptuous.” Artistically, David achieved his effect through an uncompromising clarity and a subordination of color to drawing. This economy of statement was in keeping with the new severity of taste, while his themes gave expression to the new cult of the civic virtues of stoical self-sacrifice, devotion to duty, honesty, and austerity.

Seldom have paintings so completely typified the sentiment of an age as David’s “The Oath of the Horatii” (1784), “The Death of Socrates” (1787), and “Brutus and his Dead Sons” (1789). They were received with acclamation by critics and public alike, and have become identified with the ideas of the French Revolution. In all of his historical paintings done in the years immediately preceding the great revolution, David worked hard to introduce the themes of the triumph and role of reason and one law common to all. These high ideals were the kindling that fired up people’s minds and their will to purse equality, fraternity and liberty.
Posted by Intelliblog at 01:50