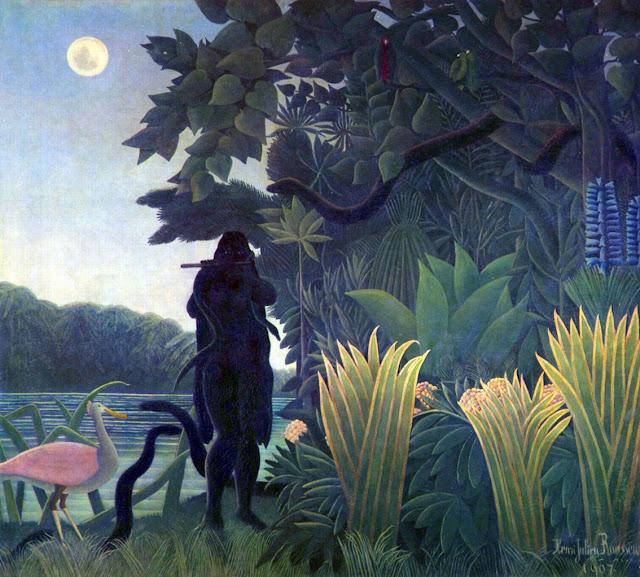 I am in Brisbane for work and the weather has been marvellous. The nights are soft, warm, balmy and the subtropical vegetation lush and beautifully green. Walking to the hotel tonight the air was perfumed with the aroma of some subtropical bloom and thinking to the picture stimulus of the latest Magpie Tales challenge it was easy to be quite literal and rhyming in my interpretation once again, influenced no doubt by the sweet, subtropical night. Henri Rousseau’s mysterious and beautiful painting is very evocative of music and its power, and his “Snake Charmer” charms also the viewer who feels drawn into the depths of the image.

In the stillness of the night
To the silvern moon’s delight
Sweetly does the flute resound
Spilling music all around.

Ebon skin and hair that shimmers
Shiny glance that softly glimmers,
Sinuous and sweet’s the air
Luring beasts from out their lair.

Music makes the jungle tame
Calms and yet ignites a flame.
Music soothes the savage beast
Rouses passions in the priest.

Neath the moon’s resplendent orb
Flowers music strains absorb.
Snakes start to slither, slide,
And up to the flautist glide.

She charms serpent, beast and bird
With her music not her word;
Now the snakes around her creep
Up they climb, roused from sleep.

Music heals the deepest wound
Makes the air around perfumed.
Music calls to arms and strife,
Yet assassins drop their knife.

In the stillness of the night
To the silvern moon’s delight
Sweetly does the flute resound
Spilling music all around.
Posted by Intelliblog at 00:49