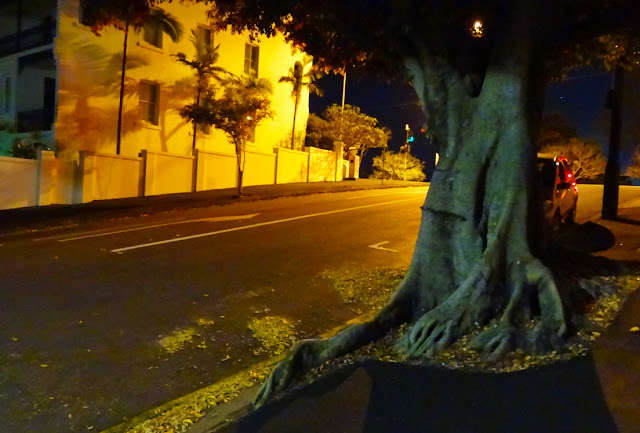 “A dreamer is one who can only find his way by moonlight, and his punishment is that he sees the dawn before the rest of the world.” - Oscar Wilde

I’ve had another busy day at work in Brisbane at our Academic Professional Development workshop. It is a rather difficult task to be organising everything, ensuring that all is running to schedule, moderating sessions and then also presenting two of them. Nevertheless, it was all worth it and another successful day concluded this evening. All of the attendees were most complimentary and gave positive feedback. One more day tomorrow and then flying back home tomorrow evening.

Tonight I decided to have a quiet evening and after eating something I went for a long walk. It was a quiet night and rather warm so it was pleasant to walk in the street and look at the houses lit by the street lights, catch snatches of music behind closed shutters, laughter from balconies and disjointed conversations wafting in the air and dissipating as I walked on by. The heady, heavily aromatic smell of night-blooming Jessamine (Cestrum nocturnum) hard to ignore, as it made the air redolent with its perfume. The large white trumpet blooms of the thorn apple (Datura stramonium) also sweet smelling, shone out in the darkness, while the more refined, delicate scent of the stocks although distinctive gave no indication of where exactly the blooms were.

I think I met all of two other people walking in the street and it was quite pleasant to say “good evening” and have them reply back with an equally cheerful greeting. There must be many other places in the world where in a city of Brisbane’s size one would not dare venture out in the street after dark, much less greet strangers in this way. How sad! Such is urbanisation and civilisation, then…

I walked back to the hotel and lay down in bed putting some music on and relaxing. It was quite a restful, peaceful time that I devoted to me and my thoughts. The darkened room, one corner lit by a bedside lamp which cast its yellow light dimly around it, and the soft strains of the second movement of Bach’s Concerto In C Minor For Oboe & Violin allowing my mind to trace endless spirals while it followed the mellifluous melody in its wanderings.

Almost time to sleep now, but here is an offering for Word Thursday:

redolent |ˈredl-ənt| adjective
1 [ predic. ] (redolent of/with) strongly reminiscent or suggestive of (something): Names redolent of history and tradition.
• literary strongly smelling of something: The church was old, dark, and redolent of incense.
2 archaic or literary fragrant or sweet-smelling: A rich, inky, redolent wine.
DERIVATIVES
redolence noun,
redolently adverb
ORIGIN late Middle English (in the sense ‘fragrant’): from Old French, or from Latin redolent- ‘giving out a strong smell,’ from re(d)- ‘back, again’ + olere ‘to smell.’
Posted by Intelliblog at 02:25