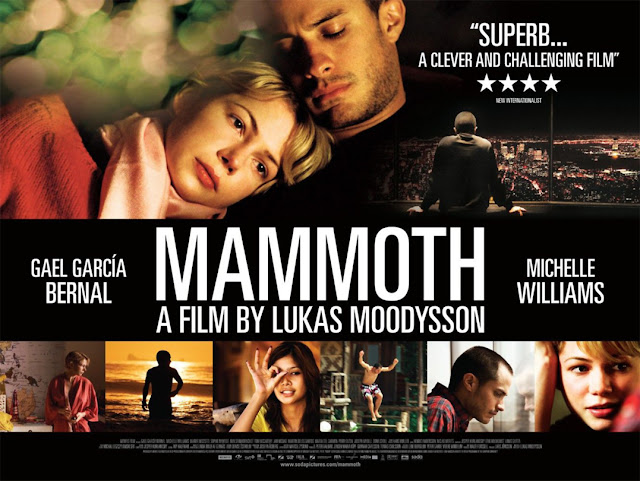 At the weekend we watched the 2009 Lukas Moodysson film “Mammoth”. It starred Gael García Bernal, Michelle Williams and Marife Necesito, although there were some good supporting performances, especially so from the three children, Sophie Nyweide, Jan David G. Nicdao and Martin de los Santos. Moodysson wrote the screenplay as well as directing the movie, so he is responsible to a very large extent for this overly long (125 minute - and often tediously didactic) movie.  Don’t get me wrong, the premise of the movie was promising and should have made a very good movie, however, cinematically this is dull and pompous filmic fare.

The plot revolves the idea of parenthood and what makes a good parent. The subplot is affluence in the decadent West contrasted with poverty in the developing East. Leo (Bernal) and Ellen (Williams) are a successful New York couple, he a web wiz, she a surgeon. They have a daughter, Jackie (Nyweide), who is being raised by Gloria, their Filipina nanny (Necesito). Gloria has two children back in the Philippines, Salvador (Nicdao) and Manuel (Santos), who are being looked after by her mother and brother. Gloria sends money to them so they can build a house and live a better life. When Leo goes to Thailand on business, he has a revelation and wants to change his life. Meanwhile, Ellen experiences a revelation of her own when she realises that Gloria has become the de facto mother of Jackie. When tragedy strikes back in the Philippines, Gloria rushes off and abandons both Ellen and Jackie to each other. Just in time for Leo to return, and attempt to salvage their lives, suitably chastened from his experiences in Thailand.

This film preaches; quietly, but preaches nevertheless. It does so heavy-handedly, although only wielding a feather. It is slow and cinematically flawed, but one is immediately aware of the point it wants to make. There are no surprises, no overwhelming climax and the sheer predictability of the ending wearies the viewer. We discussed the film in detail after seeing it and our attitudes were ambivalent. Yes, the film deals with important topics such as the social inequality between rich nations and poor ones, the different types of parents that there are: The good, the bad and the indifferent, and also the way that we each prioritise our lives. However, other films have said it more eloquently and poignantly. Other directors have tied everything together much more cinematically and the viewer was kept interested and engaged.

A comparison begs to be made with Alejandro González Iñárritu’s 2006 “Babel”, in which Bernal also played with Brad Pitt and Cate Blanchett. This was a tighter, more rapidly moving film that tackled similar themes much more effectively. The direction is masterly and the interlocking stories that reveal the common thread that ties families together makes a much better film.

“Mammoth” tries to be ‘great’ and is just mediocre. The actors do a good enough job but their performances are laboured. I had great difficulty with Bernal who was quite unconvincing in his role. Williams was more believable but could not do much with what she was given. Necesito played in a restrained fashion and with dignity in what perhaps was the best performance of the three.

The “Mammoth” of the title refers to a mammoth ivory inlaid pen that Leo is given as a gift by his colleague. It costs $3,000 but its value is nil, as we are shown at the end. This is a movie to watch with caution. If I had to choose between “Mammoth” and “Babel” I would overwhelmingly choose the latter. Watch “Mammoth” if you have heaps of time and patience and forbearance.
Posted by Intelliblog at 00:45