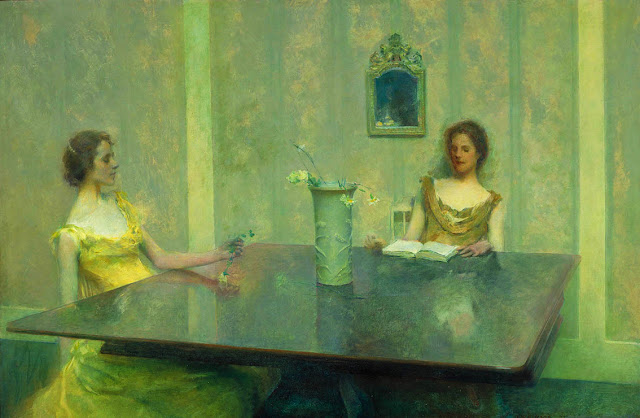 “He who would be serene and pure needs but one thing, detachment.” - Meister Eckhart

For Art Sunday today, an American Artist, Thomas Wilmer Dewing (1851-1938) who had a highly personal style, yet was influenced by impressionism and English aestheticism. He worked around the turn of the 20th century and from his native Newton Lower Falls, Massachusetts, he went to Europe and studied at the Académie Julian in Paris and in Munich from 1836-1839. He returned to the USA to settle into a studio in New York City. He married Maria Oakey Dewing, an accomplished painter with extensive formal art training and links with the art world. He is best known for his ethereal, tonalist paintings of female figures situated in moody and dreamlike surroundings. Often seated, these women play instruments, write letters, or simply communicate with one another, Dewing’s sensitively portrayed figures are distant and private, keeping the spectator a remote witness to the scene rather than a participant.

Tonalism as a style resisted the violent surge of modernism and abstraction in art, although the political success of modernism eventually succeeded in branding tonalism as an outdated mode of artistic expression in popular culture. Now that the dogma of Modernism itself is under question, a fresh assessment of tonalism is underway, free of political influence or the sway of his contemporary fashionable trends.

Dewing was a member of the Ten American Painters, a group of American Impressionists who seceded from the Society of American Artists in 1897. He spent his summers at the Cornish Art Colony in Cornish, New Hampshire. The artist was quite fortunate in having a pair of wealthy patrons who were devoted to his work. The New York insurance magnate John Gellatly was convinced that Thomas Wilmer Dewing was “the greatest living painter” and consequently acquired thirty-one of his paintings, most of which were bequeathed to the Smithsonian Institution. The Detroit businessman and railroad-car manufacturer Charles Lang Freer was sufficiently enamoured of Dewing's “decorations” to have purchased twenty-seven of them for incorporation in his eponymous gallery of art in Washington, D.C. Though their subject matter no longer fulfills its original inspirational intent, the rich painterly skills of the artist continue to delight the eye and mind. Dewing stopped painting after 1920

The painting above is his “A Reading” of 1879. The interior space in this is softly painted, tonally fairly uniform and the colours muted and gentle to the eye. The two women depicted are typical of his oeuvre, prominently placed in shallow space. They are elegant, detached creatures, elusive, idealised, and contemplative. The woman reading aloud concentrates on the book in front of her and the faint suggestion of a smile may be discerned on her face, which is otherwise closed to the viewer, as her eyes are downcast and concentrating on the book. The woman listening is also introspective and toys with a flower she has plucked from the vase, the colour of which is in harmony with her gown. This is highly civilised and restrained art, almost decadent in its sensibility and detachment. There is elegance and distance, excellent draughtsmanship and colour-handling, but quite dispassionate – which perhaps contributes to its attractiveness.

As one critic observed, “…the Thomas Wilmer Dewing type was intellectual enough to be worthy of Boston; aristocratic enough to be worthy of Philadelphia; well enough dressed to be a New Yorker, but seldom pretty enough to evoke the thought of Baltimore – but always genteel enough to insulate the viewer from disturbing thoughts of the tumultuous changes that were taking place in the real world of commerce and industry.”
Posted by Intelliblog at 11:32