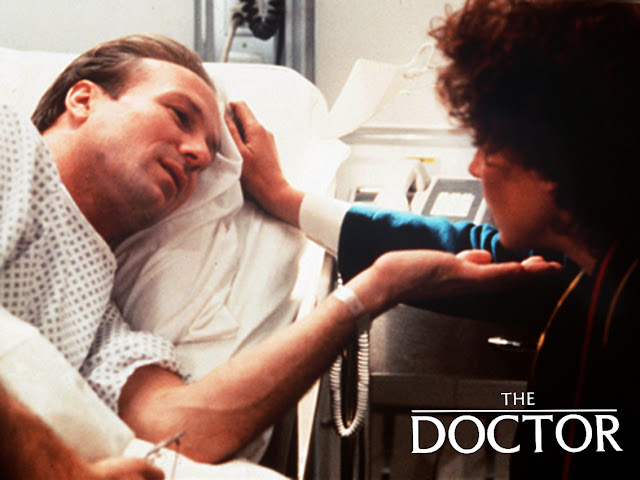 “I did not know how to reach him, how to catch up with him... The land of tears is so mysterious.” - Antoine de Saint-Exupéry
At the weekend we watched a film we had seen several years ago, as I wanted to see it again, being quite topical in terms of my friend who was diagnosed with cancer, about whom I blogged some days ago. It was the 1991 Randa Haines drama “The Doctor”, starring William Hurt, Christine Lahti and Elizabeth Perkins. The screenplay by Robert Caswell is based on the book “A Taste of My Own Medicine” by Ed Rosenbaum, which I recommended to all of my medical students to read when I was teaching.
William Hurt plays Dr Jack McKee who is an arrogant, rich, self-satisfied surgeon on top of the world. He and his colleagues, Dr Eli Blumfield (Adam Arkin) and Dr Kaplan (Mandy Patimkin) are all successful surgeons who hold lucrative posts and perform miracles with their scalpels every day in the operating theatres of a large teaching hospital. Dr Jack’s motto is: “Get in, fix it, and get out”. He completely lacks human warmth and his empathy for the patients he treats is close to zero. He and his colleagues are hardly likeable characters even though we know their job is to save lives of patients with life-threatening disease.
When Dr Jack develops a cancer in his throat, he changes from his position of power as doctor to the very vulnerable position of patient. He all of the sudden has to face the same impersonal treatment from his colleagues that he too shortly before doled out to his own patients. An early scene in the film involves Dr Abbot (Wendy Crewson) the ENT/throat surgeon who diagnoses his cancer, and she is cold, distant and clinical, making Dr Jack angry. He tells her she is not treating her patients with any compassion or empathy. She responds by telling him her patients are basically an assembly line. Hurt is humbled as he realises that his treatment of his own patients was identical to Dr. Abbot’s, as we have seen in an opening scene where he makes a cutting remark to a breast cancer patient.
With his cancer diagnosed, Dr Jack realises that his career has alienated him from his family and he is virtually a stranger to his wife (Christine Lahti) and child. Dr Jack’s awakening as human being and the relationship he builds with another cancer patient evinces from his wife changing feelings: Sympathy vs anger, jealousy vs feeling excluded, love vs hate, and a subplot is the marital discord that further troubles Dr Jack’s conscience, as he knows he is the one responsible for it. His support in the face of fellow cancer sufferer June Ellis (Elizabeth Perkins) is a saving grace, but at the same time another challenge he has to deal with as she highlights for him the abject dependency a patient has on their treating doctor. It is often said that doctors are the worst patients, and this comes out of the fact that they can experience the ultimate fear of their disease and its consequences, considering that they have the medical knowledge and experience of it.
The film is directed faultlessly by Randa Haines, who gives the film a sense of poignancy and sensitivity where in other hands it could have easily turned into mawkish sentimentality. Haines is not afraid to deal with the emotional awkwardness faced by Dr Jack and his clique and she knows exactly where she steers this movie emotionally. She concludes it strongly and movingly.
All actors play extremely well – Hurt in the leading role especially, showing a transformation that is believable and genuine. Elizabeth Perkins is superficially fragile but one can detect within her the tower of strength that Dr Jack can depend on in order to handle his own crisis. Christine Lahti manages to carry off with aplomb a difficult role that is emotionally flighty and changeable and the film could have become even more powerful if the “marital discord” scenes had been given a little bit more depth.
Overall, this film is a powerful, accessible, realistic and believable fable that criticises not the one man – Dr Jack – but rather the whole medical fraternity who while showing professionalism, emotional restraint and self-protective behaviours when dealing with patients, also have to be human and empathetic and see sickness through the perspective of the very vulnerable, confused, frightened, alienated and despondent person that every patient becomes when facing disease and the concept of their own mortality.
Posted by Intelliblog at 23:18