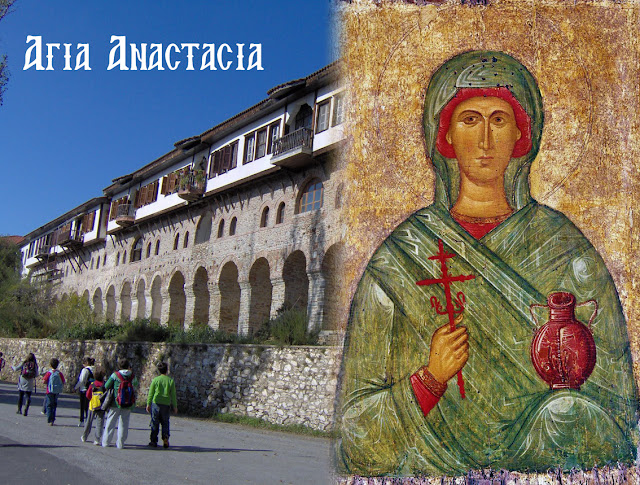 “Faith is the art of holding on to things your reason has once accepted in spite of your changing moods” - C.S. Lewis
Today the Orthodox Church celebrates the Feast Day of the Great Martyr Anastasia, the “Deliverer from Potions”, also Anastasia the Healer or Anastasia of Sirmium. She was martyred in Sirmium (Sremska Mitrovica, Serbia), and is known by the Greek term Φαρμακολύτρια (Pharmakolytria = deliverer from potions), since she has long been venerated by the church as a healer and exorcist. The name Anastasia is from Ανάστασις (Anástasis = Resurrection).
Anastasia was from Rome, daughter of a pagan father, Praepextatus and a Christian mother, Fausta and flourished around 280 AD. She was beautiful, virtuous and her family very wealthy. Her mother instructed her in the faith of Christ. After her mother’s death, her father gave her in marriage to a pagan named Publius Patricius. He subjected his wife to beatings and would keep her as a slave in the house. She only endured these torments for a short time as Publius drowned early in their marriage.
As a young widow, she never remarried and secretly dedicated her time to the poor, the sick and those in prisons by serving their needs daily. She would wash their wounds and especially console them during their anguish. Through her intercessions and prayers, she healed many from the effects of potions, poisons, spells and other harmful substances. This is how she received the honorific appellation “Deliverer from Potions”.
Words of her deeds and miracles spread throughout the area and her fame brought about her arrest under Diocletian’s persecutions. She was tortured and endured many torments and was eventually put to death by fire in the year 290. In the fifth century the relics of the saint were transferred to Constantinople, where a church was built and dedicated to her. This was the church where St. Andrew the Fool-for-Christ was brought to be cured from his foolishness. St. Anastasia appeared to him in a dream and encouraged him to continue his ascetic life. Later the saints’ head and one of her hands were transferred to the Monastery of St. Anastasia the Pharmokolytria, in Chalkidiki, Greece.
Anastasia is a well-beloved saint in the Orthodox calendar and many women are named in this saint’s honour.
Posted by Intelliblog at 21:34