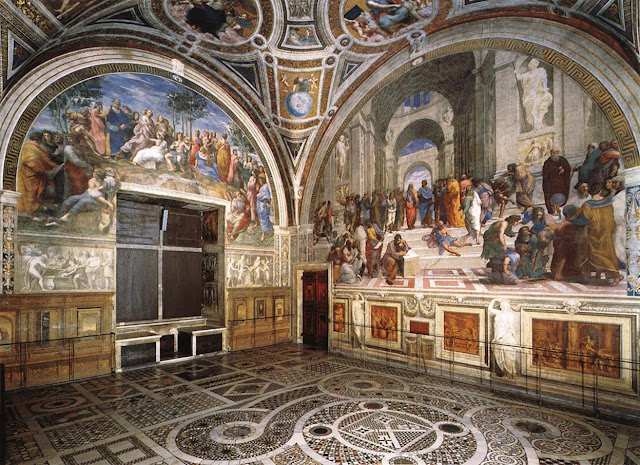 “Time is a vindictive bandit to steal the beauty of our former selves. We are left with sagging, rippled flesh and burning gums with empty sockets.” – Raphael
Raphael (Raffaelo Sanzio da Urbino), one of the foremost Italian painters and architect of the Renaissance, was born April 6, 1483 in Urbino. This is a small, but significantly artistic town in the region of Marches in central Italy. He died April 6, 1520, in Rome, the Papal States. Together with Michelangelo and Leonardo da Vinci, he forms the great trio of High Renaissance masters. Raphael was particularly noted for the grace and beauty of his paintings, which became a model for high renaissance art.

Raphael’s father was a court painter and Raphael followed in his father’s footsteps, gaining a wide education in the arts, literature, and social skills. This enabled Raphael to move easily amongst the higher circles of court society, which helped his career in gaining commissions. As a member of Perugino’s workshop, he established his mastery by 17 years of age, and began receiving important commissions. In 1504 he moved to Florence, where he executed many of his famous Madonnas. His unity of composition and suppression of inessentials is evident in “The Madonna of the Goldfinch” of 1506.

Though influenced by Leonardo da Vinci’s chiaroscuro and sfumato technique, his figure types were his own creation, with round, gentle faces revealing human emotions, but which are raised to a sublime serenity and appear to exist on an otherworldly plane. In 1508 he was summoned to Rome to decorate a suite of papal chambers in the Vatican. The frescoes in the Stanza della Segnatura are probably his greatest work; the most famous, The School of Athens (1510-11), is a complex and magnificently ordered allegory of secular knowledge showing Greek philosophers in an architectural setting.

The Madonnas he painted in Rome show him turning away from his earlier works’ serenity to emphasise movement and grandeur, partly under Michelangelo’s High Renaissance influence. “The Sistine Madonna” (1513) shows the richness of colour and new boldness of compositional invention typical of his Roman period. He became the most important portraitist in Rome, designed 10 large tapestries to hang in the Sistine Chapel, designed a church and a chapel, assumed the direction of work on St. Peter’s Basilica at the death of Donato Bramante, and took charge of virtually all the papacy’s projects in architecture, painting, and the preservation of antiquities.

Raphael had one of the largest art schools in Rome, with over 50 students. It is said Raphael was not just a genius of art but also excellent at managing and inspiring his pupils, helping the school become a famous place of art. As well as a painter, Raphael was also a noted architect, draughtsman, and with Raimondi, a printmaker of his engravings. He died in April 6 1570, aged only 37. Yet, he left behind a considerable legacy and his work was celebrated even during his lifetime. His last masterpiece, the “Transfiguration” altarpiece, was placed at the head of his bier, and thousands of people attended his funeral.

Anyone who has been to the Vatican can only marvel at the richness of the apartments and the wealth of significant artworks that one meets on every step. The Stanza della Segnatura is an amazing place and Raphael’s frescoes give the rooms a magnificence that is quite awe-inspiring. The “School of Athens” is on the right above and the fresco represents the degrees of knowledge or the truth acquired through reason. The fresco’s position as well as the philosophers’ walk in direction of the Holy Sacrament on the opposite wall suggested the interpretation of the whole room as the movement from the classical philosophy to the true religion and from the pre-Christian world to Christianity. It was meant to reside over the philosophical section of Pope Julius II’s library. It is perhaps Raphael’s most famous fresco. On the left side above, is “Mount Parnassus”, representing poetry. Ancient and Renaissance poets are centered around Apollo, who is seated in the centre, accompanied by the nine muses.
Posted by Intelliblog at 17:22