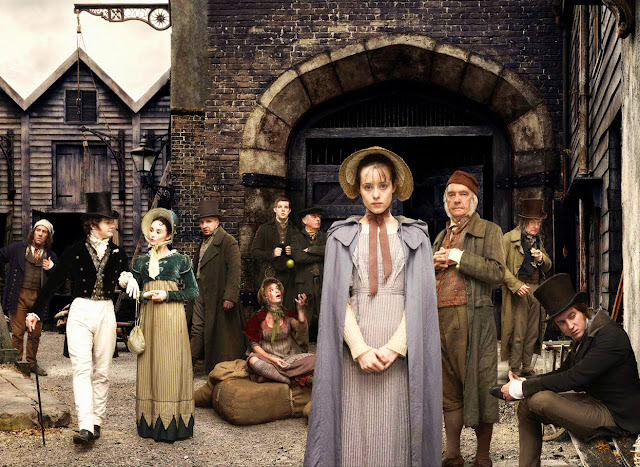 Ever since my youth I have enjoyed reading the novels of Charles Dickens. They are full of memorable characters, intricate plots, remarkable incidents, great themes and social commentary, as well as a great story told in vivid and engaging language. I went through most of his novels while at University and since then have not revisited them, until now, having watched three excellent adaptations for TV produced by the BBC.

The first TV series based on a Dickens novel we watched is “Our Mutual Friend” about which I have blogged about previously, the second is “Bleak House”, which I have also reviewed, and the last one we watched is “Little Dorrit”. The production standard of all of these series is excellent and if it’s one thing that the British do well, it is period dramas of this type. The atmosphere is just so right and the care that has been put into every detail is faultless. Usually, the acting is exceptional and the adherence to the plot of the novel is very good.

The 2008 production of “Little Dorrit”, starring Claire Foy, Matthew Macfadyen and Tom Courtenay, and directed by Adam Smith, Dearbhla Walsh and Diarmuid Lawrence was of the usual BBC excellent standard. If it is any indication the IMDB rating for this series is 8.5, based on just under 2,100 viewer votes. My rating certainly adheres to this.

Many nineteenth-century critics judged “Little Dorrit” to be Dickens’s worst novel. Thankfully, it has been reevaluated in the second half of the twentieth century and is today considered to be a masterpiece by many scholars, who praise its biting criticism of the modern world’s corrupt social and political institutions.

The title character of the novel, “Little Dorrit” as she prefers to be called, was born within the walls of the Marshalsea Debtors’ Prison, which became her family’s home as her father’s financial failings caused him to declare bankruptcy. Amy’s mother died shortly after her birth, but Amy and her siblings continued to live inside the prison with their father until they were grown up. Trained as a seamstress by one of the other inmates, Amy leaves the prison every day to sew for Mrs Clennam, a widowed invalid confined to her home. Mrs. Clennam’s son Arthur had spent twenty years in the Orient working with his father and when Mr Clennam died, Arthur returned to England. He refused to join his cold, miserly mother in her business, preferring to take his portion of the inheritance and go off on his own.

Impressed by Little Dorrit’s sweet nature, Arthur tries to help the girl by working to secure her father’s release from prison, by helping her to obtain more customers for her needlework, and by sending her small amounts of money. In the course of the investigation into William Dorrit’s debts, it is discovered that he is the sole surviving heir of a large estate, which he promptly claims. Dorrit pays his creditors and leaves the prison that had been his family's home for twenty years. Ungrateful for Arthur's efforts on their behalf, the Dorrits, with the exception of Amy, refuse to speak to him any longer and go off to Europe on a grand tour to make society connections.

The plot then follows the trials and tribulations of Arthur and the Dorrits as their paths continue to cross and several mysteries are resolved until a dramatic conclusion gives everyone  their just desserts.

This is an excellent production and we recommend it most highly.
Posted by Intelliblog at 18:32