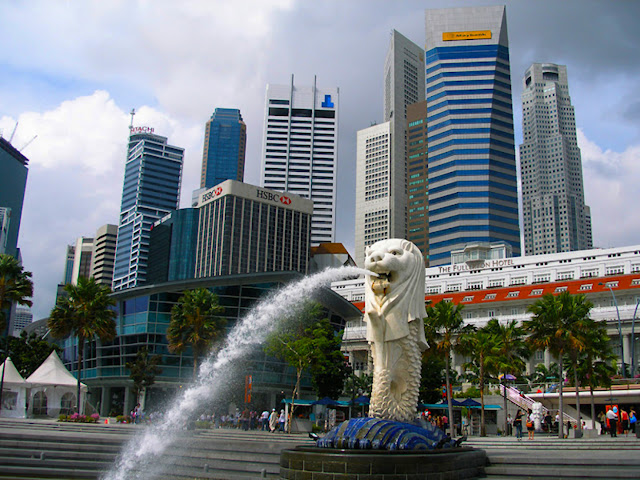 “Asia is rich in people, rich in culture and rich in resources. It is also rich in trouble.” Hubert H. Humphrey

Today is Singapore’s National Day. Singapore spread over a major island and 62 small ones was founded by Sir Stamford Raffles and was a British Crown Colony since 1867 until its independence in 1965. The mangrove-swamped island to the South of Malaysia was transformed in an astoundingly short time into one of the most modern and economically developed countries of Southeast Asia. With few natural resources on its 710 square km area to employ its ethnically diverse 5.2 million inhabitants, Singapore has built its economy on financial services, manufacture of precision goods and electronics, as well as free enterprise and tourism. The climate is hot and humid with much rainfall allowing the tropical vegetation free rein and making the Singapore orchids a national symbol as well as a major export. Singapore is the capital with Jurong another city to the Northwest.

Singapore has over 50% of its area covered by lush tropical vegetation and with over 50 major parks and 4 nature reserves, it is truly a garden city. Large self-contained residential towns have mushroomed all over the island, around the clean and modern city centre. The centre of the city located in the south of the larger island, — consisting roughly of the Orchard road shopping area, the Riverside, the new downtown Marina Bay area and also the skyscrapers-filled Shenton way, which houses the financial district known in acronym-loving Singapore as the CBD (Central Business District).

Singaporean food is well-known throughout the world, with bustling hawker centres and 24-hour coffee shops offering cheap food from all parts of Asia. The city is a shoppers mecca and tourists can easily go over their baggage allowances in Orchard Road and Suntec City. In recent years some social and cultural restrictions have also loosened up, and now you can bungee jump and dance on bar-tops all night long, although alcohol is still very pricy and chewing gum can only be bought from a pharmacy. Two casino complexes — or “Integrated Resorts”, to use the Singaporean euphemism — opened in 2010 in Sentosa and Marina Bay as part of Singapore’s new Fun and Entertainment drive, the aim being to double the number of tourists visiting and increasing the length of time they stay within the country.

Singapore holds numerous events each year. Some of its famous festivals and events include the Singapore Food Festival, the Singapore Grand Prix, the Singapore Arts Festival, the Chingay Parade, the World Gourmet Summit and ZoukOut. The Singapore Sun Festival is another popular festival in Singapore, with many international celebrities visiting the country to take part. Christmas is also widely celebrated in Singapore, a season where the city streets and shopping malls along its famous shopping belt Orchard Road are lit up and decorated in vibrant colours. In addition, the Singapore Jewel Festival attracts numerous tourists every year, and is a display of precious gems, famous jewels and masterpieces from international jewellers and designers.

I always enjoy visiting Singapore, having opportunity to go there for work or to stop over when we fly to Europe. It is a hospitable, clean and safe country where the people are friendly and there is a lot to see and do, with many new attractions, increasing services and huge developments being apparent each time we visit. The hotels are numerous and well appointed and places that we love to visit are the Botanic Gardens (including the National Orchid Garden), Little India, Arab Street, Sentosa Island and of course the CBD. Singapore National University is another place that I visit often and this is a premier University not only in Asia, but also worldwide.
Posted by Intelliblog at 11:19