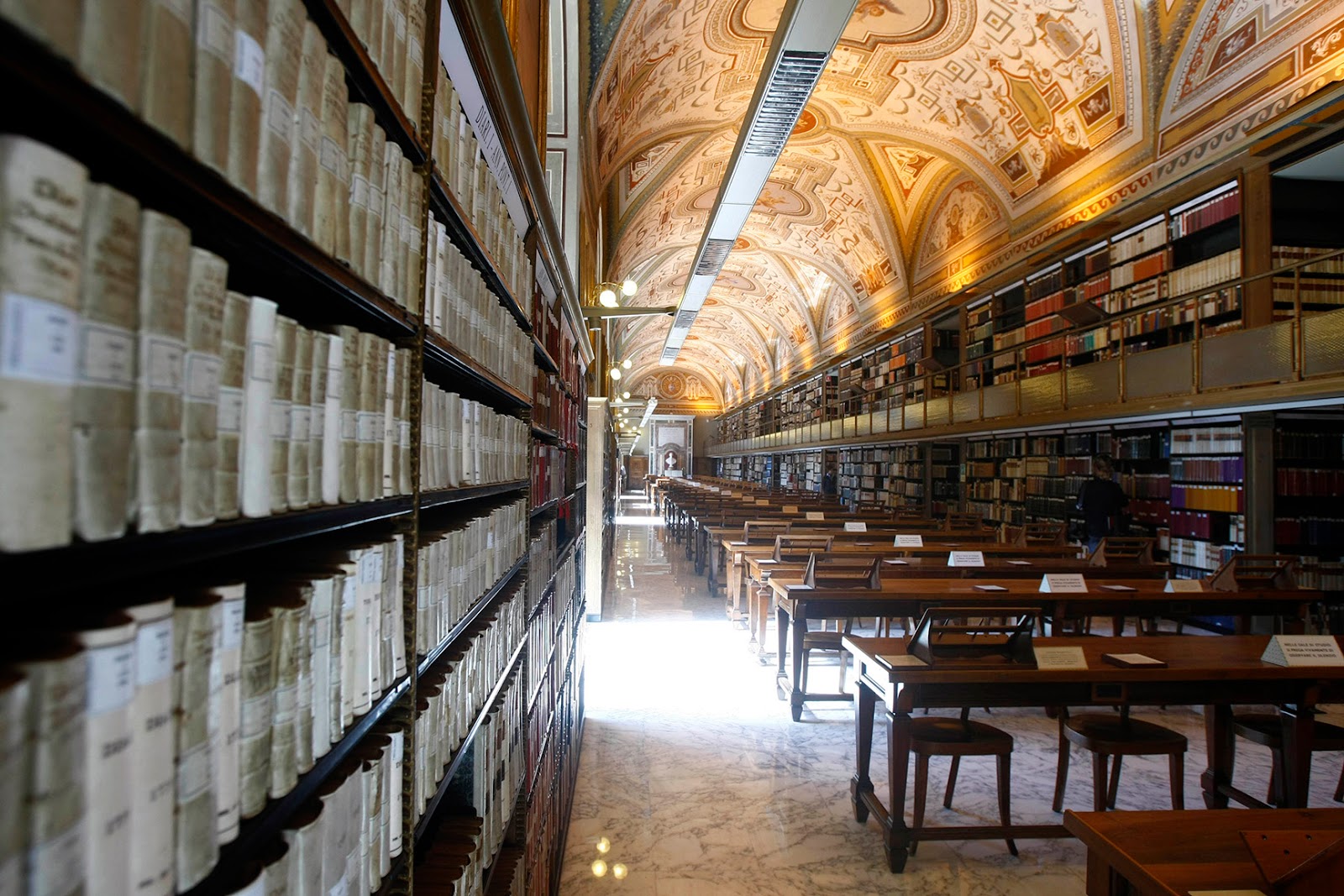 
Doing some cleaning up in my study yesterday I came across a volume of poems by ancient Roman poet Catullus. His explicit writing style has shocked many readers and hence his poems have often been bowdlerised, edited, expurgated or even completely forbidden for many years in many countries. This concept of “forbidden literature” occupies my blog today and what better place to start with than the Vatican Library? The Vatican is an independent country (the smallest in the world, in fact) and it is there that the Pope has absolute temporal rule but also rules spiritually over millions upon millions of Roman Catholics the world over.

The Pope is of course the spiritual head of the Catholic Church, but he also has to manage the Vatican and its affairs like any other Head of State does. The Vatican Bank has millions upon millions of dollars in funds as befits an organisation with worldwide interests and the Pope is its nominal owner. The Pope is also the nominal owner of the Vatican Library. This, unlike the Vatican Bank, is a place that fascinates me and induces bouts of intellectual salivation in my brain. It is one of the richest libraries in the world as well as one of the oldest! It has accumulated works on its shelves from the fourth century AD, recording not only details of its own history but also those of heretical Christians and Gnostic sects. Although it officially claims that everything before the ninth century was lost “for reasons not entirely known”, the majority of the material still exists. However, access to much of this material is strictly controlled.

In fact the Vatican Archives contain one of the richest storehouses of “forbidden literature” in the world. There is more satanic, occult, pornographic and heretical works here than in any other library in the world. While some of the collections of the Vatican Library have been open to the public since the fifteenth century, the cardinal in charge of the institution ensures that all of the “forbidden literature” is kept hidden.

The Papal Inquisition brought many new titles into the secret collection, but it was the creation of the Index Librorum Prohibitorum that gave the biggest boost to the Vatican Library’s secret section. Under the Index, copies of any heretical, satanic, occult or pornographic works discovered were immediately lodged with the Pope’s librarians “for the record”. The situation has been that even legitimate Catholic scholars find access to many of these classified books difficult. Control is achieved through not indexing material because it is obvious that you cannot request what you do not know exists.

On another side of the library are the archives of Papal and Church papers. It takes real confidence in your power to keep buried what you do not want others to know, and call your repository of suppressed papers and documents the “Vatican Secret Archives”. Headed up by a cardinal in the same way that the Vatican Library is, the Secret Archives are home to everything the Church wants kept in the dark, including Nazi collaboration and scandals dating back to the earliest periods in its history. Vast, purposefully disorganised and running to more than 24 miles of shelves, the Archives are only open to those with direct approval from the Pope.

Throughout history, fiction has always been scrutinised by censors. Whether it be themes of politics, religion, or it just has a lot of sex in it, people the world over have objected to a book and have reacted against an author at one time or another. But, in today’s society we can now read about complex themes of heavy handed governments, violence, and drugs without the fear of being tapped on the shoulder by the censor. Here is an example of what in the past (or in some cases even today in some countries!) is considered “unwholesome” or “unsuitable” for general consumption by the reading public.
Brave New World By Aldous Huxley (1932);
The Grapes Of Wrath By John Steinbeck (1939);
Tropic Of Cancer By Henry Miller (1934);
Slaughterhouse-Five By Kurt Vonnegut (1969);
The Satanic Verses By Salman Rushdie (1988);
The Perks Of Being A Wallflower By Stephen Chobsky (1999);
Things Fall Apart By Chinua Achebe (1958);
American Psycho By Brett Easton Ellis (1991);
The Metamorphosis By Franz Kafka (1915);
Lolita By Vladimir Nabokov (1955).

Many more such “banned books” exist and the Wikipedia list with places where they are banned and the reason why they are banned is quite interesting to read.
Posted by Intelliblog at 12:03