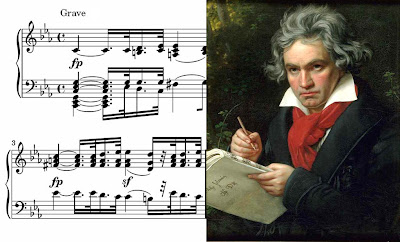 Today is a noteworthy day as it is the birthday of a whole variety of interesting persons:
Ludwig van Beethoven (1770–1827) is the German composer who is widely recognised as one of the greatest composers who ever lived. Mozart and Haydn acknowledged Beethoven’s talent while he was still young. His remarkable piano virtuosity and astounding compositions won him the generous support of the Viennese aristocracy despite his boorish manners. In 1801 he started to realise that he was becoming deaf, a condition which worsened progressively and was total by 1817. His creative work was never restricted and some of his greatest compositions he never heard while they were being played.

Beethoven's early works, influenced by the tradition of Mozart and Haydn, include the First and Second Symphonies, the first three Piano Concertos, and a many piano sonatas, including the Pathétique. From 1802, his work broke new ground, leaving behind the formal conventions of classical music. This most productive middle period included the Third Symphony (Eroica); the Fourth, Fifth (Fate), Sixth (Pastoral) Seventh (Dance) and Eighth Symphonies; his one Violin Concerto; and his only opera, Fidelio.

Beethoven's final and most mature period, dates from about 1816. It was productive of works of greater depth, including the Hammerklavier Sonata; the lofty Ninth Symphony (Choral), with its innovative choral finale (based on Schiller’s Ode to Joy); the Missa Solemnis; and the last five String Quartets. Beethoven also produced many smaller works for a variety of instruments and groups. His work terminated and epitomised the classical period and initiated the romantic era in music.

Here is Freddy Kempf playing the second movement of the Pathétique piano sonata (Piano Sonata No. 8 in C minor, op. 13).


The 1820 portrait of Beethoven above is by Joseph Karl Stieler.

Preparations for Christmas are well under way and we decorated the house all day today. The holiday mood is already infecting people. I guess this is the time to finish writing the last of the Christmas cards. Such a tradition that it has become. The Victorians are responsible for most of our Christmas traditions. They seem to have elevated Christmas from a religious/family holiday to one of general celebration and communal merry-making. The crass commercialism of Christmas today is thinly veiled in sentimental Victorian traditionalism. Rather difficult nowadays to find a place in the world where Christmas still means something spiritual. But I guess anything is what each of us makes of it, Christmas included. If one wants to make Christmas something else than what the big shopping centres tell one, something else than what is blasted out of the TV screen, then it is in one’s heart that one should search.
Posted by Intelliblog at 10:29