OF ONIONS AND ORCHIDS 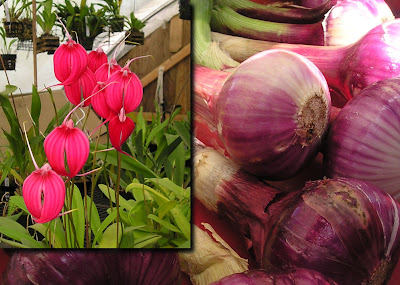 “In gardens, beauty is a by-product. The main business is sex and death.” - Sam Llewelyn

The masdevallia orchid, Masdevallia coccinea, is the flower that is associated with birthdays falling on this day. The magenta blooms have three petals and the meaning associated with the plant is: “I must have you at any cost”. This orchid genus is named for Jose Masdeval, a physician and botanist in the court of Charles III of Spain. These plants are found from Mexico to southern Brazil, but mostly in the higher regions (2,500 - 4,000 m) of the Andes of Ecuador and Colombia, Peru and Bolivia. They may be epiphytes, terrestrials or growing as lithophytes on damp rocks. All these orchids look alike and ordinary when they are not in the flowering season. But then the surprise is the greater when their wonderful flowers open up.

Tonight is St Thomas’s Eve. In the past, girls used to perform the following old love charm. They got a large red onion, peeled it and stuck nine pins into it, one in the centre, the others arranged radially around it. The girl would then say:

Good St Thomas, do me right,
Send me my true love tonight,
In his clothes and his array
Which he weareth every day,
That I may see him in the face
And in my arms may him embrace.

The onion would then be placed under the pillow (sic!) and the woman would dream of her future husband. If the smell of onions was rather offensive, an alternative charm was to scratch the initials of potential husbands on several onions (unpeeled!) and then place them in a dark place. Whichever sprouted first disclosed the future husband.

Tradition has it that ghosts are allowed to walk the Earth from this night until Christmas Eve. Extra precautions were taken and prayers invoked whenever one ventured out at night.

orchid |ˈôrkid| noun
A plant with complex flowers that are typically showy or bizarrely shaped, having a large specialized lip (labellum) and frequently a spur. Orchids occur worldwide, esp. as epiphytes in tropical forests, and are valuable hothouse plants. • Family Orchidaceae: numerous genera and species.
• the flowering stem of a cultivated orchid.
DERIVATIVES
orchidist |-ist| |ˈɔrkədəst| noun
ORIGIN mid 19th cent.: from modern Latin Orchid(ac)eae, formed irregularly from Latin orchis based on Greek orkhis, literally ‘testicle’ (with reference to the shape of its tuber).