GOD SAVE THE QUEEN, NOBODY ELSE WILL... 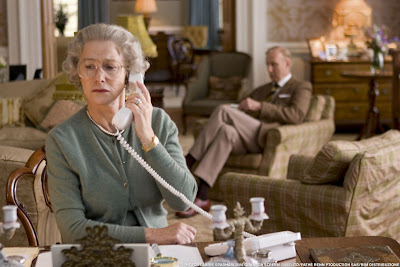 “Whenever monarchs err, the people are punished.” – Horace

We watched the Stephen Frears 2006 film “The Queen” with Helen Mirren, yesterday. I had a very mixed reaction to this movie, I must admit. Firstly, I had heard so many rave reviews about it that my expectations were extremely high. Once we began to watch the film, I was awaiting eagerly for the development, the drama, the revelations, but unfortunately none of that was there. There is no doubt that Helen Mirren’s performance is faultless and that it is she who makes this ordinary film watchable.

However, at one point early in the film, its purpose became immediately apparent. “The Queen” is nothing more than propaganda for the House of Windsor. The Royal Family has its staunch supporters and its limitless influence (economical as well as political) is enough to be able to produce such a film. Sure enough, the portrayal of the Queen Mother as an irrelevant gin-swilling has-been of the ancien régime, of Prince Phillip as a bumbling fuddy-duddy immersed in his own little universe of hunting and gathering wool and of Prince Charles as a weak and powerless pawn in the Queen’s gambit may be uncomplimentary of Royalty, but the film is after all called “The Queen” and it is to the Queen’s glory that it is dedicated.

The Queen is portrayed in the film as a sophisticated, serene and worldly woman, a consummate statesperson, a glorious, dignified and wise monarch intent on maintaining a tradition that has a history of several centuries. She is cast in this film in the mould of Elizabeth I, although unlike her, Elizabeth II is not such an extraordinary personage nor is she such a powerful political and social force. The news media of today have exposed the extraordinary ordinariness of Queen Elizabeth II and this film would have been much more believable if it did show the monarch in this true, albeit less flattering light.

What I found also very disturbing was the seamless incorporation of actual documentary footage into the film, which superficially gave the events depicted authority and veracity. However, this is the stuff of propaganda. A great Greek song by Theodorakis says:
“They told you many lies,
They tell you lies again today;
And tomorrow they’ll tell you lies once more.
Your enemies tell you lies,
But even your friends hide the truth from you…”

This is the sort of film that will in the future remain a powerful corrupter of the future generations’ sense of history. It does this through its clever use of documentary evidence, tacit approval by the personage it portrays, and through its “heroic” treatment of ordinary events (that have been rendered even more sordid in reality by the high media exposure of the people they concern). Tony Blair’s character is portrayed with some authenticity, perhaps. He is shown as a typical Labour leader whose ideals soon fall to the wayside as his own propaganda machine (the advisers and hangers-on successfully telling him how to handle the Dianagate affair) finally not managing to prevent him from succumbing to the Queen’s fascination.

Blair’s epiphany is laughable, but quite believable. He did end up to be one of the most un-Labour-like leaders see in British politics in the last few decades. What caused this is not perhaps the Queen, but rather political expediency and buckling under the pressure of capitalistic globalisation concerns.

Curiously the film reminded me of British films of the 40s and 50s where there was an almost martyr-like portrayal of tragic Britishers intent on maintaining a stiff upper lip in the face of adversity. A paean to all things British and oh, so gung-ho and full of insular, snobbish rubbish about the superiority of the English. The whole scene with the stag and the heavy-handed pointed identification of Elizabeth with the regal stag is quite sickening in its sentimental kitchness.

Watch this film if you are a monarchist and rejoice – optional waving of the Union Jack at appropriate points and munching of cucumber sandwiches (delicately) is advised. If you are after a film with intense scrutiny of recent social and political events, airing of controversial theories and a ruthless investigation of the truth, then this film is not for you. If you wish to enjoy Helen Mirren and Martin Sheen playing their roles with gusto and convincing theatricality as the Queen and Mr Blair respectively, then the film is also worth watching. However, if you wish to watch a film that is an intense exploration into the obviously complex relationship between Elizabeth and Diana, this film is not for you. The film would have been much more interesting had it shown with far greater detail the whole story of Diana, instead of just the week surrounding her death. Without the story, this film suffered from a lack of complexity and drama.

Is it art? Definitely not. Is it cinerealism? You’ve got to be kidding! Is it a glossy monarchist filmic production akin to royal-watchers’ saccharine publications for home consumption? You bet it is!
Posted by Intelliblog at 10:43