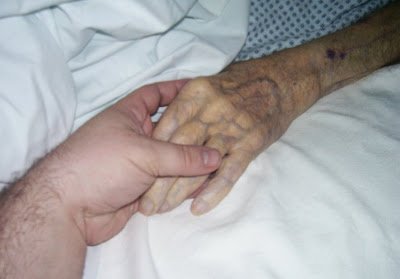 “Age does not protect you from love, but love to some extent protects you from age.” – Jeanne Moreau

Very close to where we live there is an Old People’s Home. It is a fairly modern establishment, only a few years old, well-equipped and staffed. The majority of the inmates are of Greek origin as the home has been built with donations from the Greek community, Greek welfare groups and, of course, contributions from the state and federal governments. The increasing number of elderly people in our communities (and in a multicultural country like Australia, where there are many elderly people who do not speak English well), places quite a strain on social services. Hence, there is quite a great deal of support for the establishment of new facilities that look after the elderly, especially those old people that belong to minority groups.

The odd thing that struck me the first few times I drove past this establishment was that although the car parking lot is quite large, there never seem to be any cars parked in it. Sure enough, there are always cars in the “staff only” area, but the visitors’ car park is empty. Was it this that first made me stop and park there? Or maybe it was the sign that encouraged people to enter and have an inspection tour. In any case, I parked there and went in.

Helpful staff attended to me immediately, and after I had introduced myself I explained that although I had no relatives there, I would like to have a look around. I was given the tour of the place by an efficient, good-humoured employee and also met some of the inmates, to whom I was introduced. The building sure enough was new, clean, well-designed. There were adequate facilities, roomy common areas and the bedrooms were comfortable and well-appointed. Staff were pleasant and competent, there were large windows, plenty of light, a garden. However, there was a coldness in the place too (even though the day was hot) and a sense of institutionalised, clinical, crispness. This was definitely a “Home” not a home.

My eyes met the eyes of the elderly people living there and a quiet melancholy gripped me. Their gazes were kindly, their lips turned up in a smile, their words sweet enough. As I stopped and chatted with a few people, their smiles broadened as they heard me uttering their mother tongue. Their questions inundated me, their curiosity was inexhaustible, their eagerness to engage in conversation amazing. We laughed, I shared a few jokes with them, some snippets of news from “the outside”.

Suddenly I was not the stranger that had walked in earlier. For each of the old men, each old woman in the Home, I was a son, a grandson, a nephew, a grand nephew, a son-in-law, a dear relative. Their bony hands clutched mine and blessings were heaped upon me as tears trickled slowly down their wrinkled cheeks. The forgotten people found it hard to believe that a stranger had remembered them on an ordinary day like this, when their kin had perhaps hardly even thought of them. My heart felt crushed in my chest and I too felt a curious sense of kinship with these old people - grandfather, grandmother, great-aunt, great-uncle…

I spoke to the employee who had given me the tour. Most of these people were lucky to have a visit once every six months, once a year, he said… An elderly woman (certainly the exception, he assured me as he pointed her out) had not been visited for two and a half years. “Did she not have any relatives?”, I enquired. “Indeed, she did!” He assured me. “They pay the bills, that is enough to keep the voice of their conscience quiet…”

I looked at the woman with no visitors. She had clasped my hand tightly just before. Her eyes had been lucid and she was smiling – no tears from her! “Come back, visit us again, when you can!” She had said to me and gently patted my hand. She was now in her wheelchair looking out of the window towards the visitors’ car park. Hoping perhaps to catch glimpse of a familiar car, the face of one of her relatives?

I’ll visit again soon, before Christmas. I’ll have small gifts for them. Some sweets, a few books, some music. But more importantly, some of my time shared with them. A friendly smile, a gentle touch, some time spent listening to them, reassurance that they have not been forgotten…
Posted by Intelliblog at 00:56