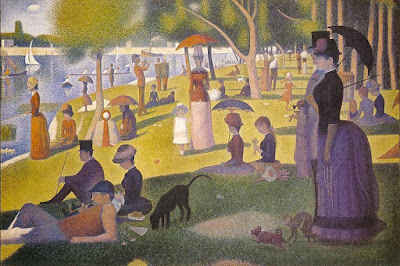 “One eye sees, the other feels.” – Paul Klee

A single painting today: Georges Seurat’s famous canvas, “Un dimanche après-midi à l'Île de la Grande Jatte” (1884-1886). Seurat is the greatest proponent of the pointillists. They painted by placing very small brush strokes of pure colour right next to each other which when viewed from a distance will cause spatial summation to occur and for the desired colour to appear and forms to be seen.

It is basic knowledge that eventually things get to small to see. What isn't so well known is how the visual system treats the light coming from places to close together that we cannot tell that there are two places, say two dots, a red and a blue, right next to each other, as Seurat did on his canvas. What appears to happen is that the light is added together as if it came from one place.

Georges Seurat (December 2, 1859 – March 29, 1891) was only 26 when he first showed “A Sunday afternoon on the isle of La Grande Jatte” 1884 at the eighth annual and final Impressionist exhibition in 1886. In scale, technique, and composition it appeared as a scandalous eruption within Impressionism, a deliberate challenge to its first practitioners, such as Renoir and Monet. It immediately changed the course of vanguard painting, initiating a new direction that was baptised "Neoimpressionism."

Seurat died at age 31. He created other ambitious canvases, but “La Grande Jatte” has remained his definitive achievement. Although the picture was only rarely seen in the three decades following his death in 1891, its visibility was dramatically increased in 1924, when Frederic Clay Bartlett purchased the picture and placed it on loan at the Art Institute of Chicago. It has hung there ever since. Seurat's first major painting to enter a public collection, “La Grande Jatte” has become an icon, one of the art world's most recognisable images.
Posted by Intelliblog at 01:09