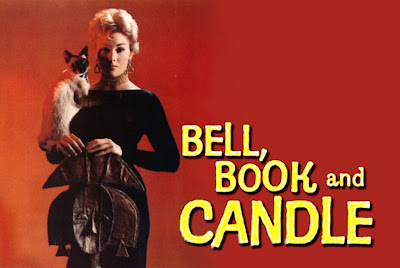 We watched an old film on DVD yesterday, which can only be classified as “dated fluff”. Therein lay its charm. It was quite an amusing retro look at the world, idealized and mixed with a dollop of fantasy, a slip of whimsy, a drop of charming performances, a smidgeon of romance, a soupçon of comedy and all set in a wintry, snowy New York City of the late 50s. Add to that some good jazzy music and what I thought would be a dull hour-and-a-half turned out to be some good light-hearted fun.

The film is Richard Quine’s “Bell, Book and Candle” of 1958, starring James Stewart and Kim Novak. They are wonderfully supported by a very young Jack Lemmon and a delightfully fluffly, elderly Elsa Lanchester (remember her as the Bride of Frankenstein in the 1935 movie?). The plot is based on a play by and one could very well see that this movie perhaps inspired the very successful TV sitcom “Bewitched”.

The plot revolves around some modern-day witches living in Manhattan, and who have some very special powers, but also some very interesting limitations. For example, a witch cannot cry and cannot blush. She can have “fun” but she cannot fall in love – well that’s what the rules say anyway. Kim Novak plays the young witch and Jimmy Stewart is the publisher who gets hexed. Helping it all along is a gorgeous Siamese cat, Pyewacket, the witch’s familiar of course! All sorts of mayhem follows embroiling Jack Lemmon and Elsa Lanchester, not to mention Ernie Kovacs playing a drunken author of books on magic, but as one would expect it all turns out right in the end.

Interesting is the ambience of late 50s New York and a wonderful little underground boîte called the “Zodiac Club” where all Manhattan witches go to have fun. It’s all very civilized and so nostalgic that it could very easily become fashionable all over again!
Posted by Intelliblog at 01:29