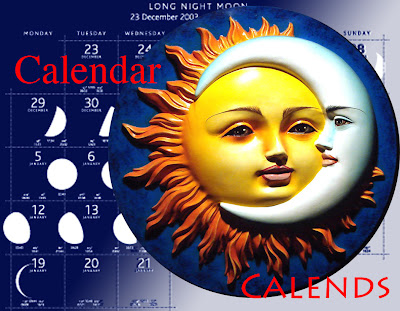 “Butterflies count not months but moments, and yet have time enough.” - Rabindranath Tagore

It was on this day in 1751 that the British Parliament decreed that Britain should change over from the old style, Julian Calendar to the new style, Gregorian Calendar, which corresponded with the solar calendar and was therefore 11 days ahead. To make up for the discrepancy, in 1752 September 4th was followed by September 14th. This led to wild demonstrations in the streets of London where the angered mob demanded: “Give us our 11 days back!”.

The solar year depends on the revolution of the Earth around the sun, each revolution taking 365.2422 days. The tilt of the Earth’s axis is responsible for the seasons. At the same time, the moon has influenced the development of a calendar with each lunar cycle lasting for approximately 1/12 of the solar year. This has given rise to subdivision of the year into 12, sometimes 13 months. The word month itself shows its close association with the word moon. The ancient Greeks had a similar association: mén = “month”, méne = “moon”.

The Western calendar developed from the ancient Greek and Roman calendars. The term calendar itself is derived from the Latin calenda meaning the first day of the month. The ancient Roman calendar is the one that corresponds most closely to our own and was called the Julian Calendar as it was standardised by Julius Caesar in 46 BC. His Greek astronomer Sosigenes devised a 12 month calendar of 365 days, with a leap year of 366 days every four years. Each month had 30 or 31 days except for February, which was considered unlucky and hence had 29 days except every leap year when it had 30. This was until Augustus Caesar renamed the old Roman month Sextilus after himself, in the process robbing February of a day in order to increase August’s 30 days to 31.

The Julian calendar assumed that the year lasted for exactly 365.24 days. The real year was about 11 minutes and 14 seconds shorter than the Julian year and over the decades, the seconds and minutes added up to hours and days, making the real seasons drift away from the calendrical seasons. After a few centuries, the Church began to find it difficult to set the moveable Church feasts such as Easter, which depend on the Vernal equinox. Pope Gregory XIII in 1582 decided to remedy the situation, which by that time had led to a calendrical discrepancy a few days ahead of the seasonal calendar. The Pope decreed that February would have 29 days in century years that could be divided evenly by 400 (e.g. 1600, 2000), but only 28 days in century years that could not be divided evenly by 400 (e.g. 1700, 1800, 1900). Commencing in October 1582, ten days were dropped from the calendar in order to correct the discrepancy! The resulting calendar is the Western Gregorian Calendar in use throughout most countries around the world today.

Most Catholic countries adopted the Gregorian calendrical reformations immediately after Pope Gregory’s modifications, and other Western nations followed suit soon after (e.g. France, Spain, Portugal, Luxembourg 1582). As the Pope had no authority over the Eastern Orthodox Churches, the Julian calendar persisted in its use in the countries where the Orthodox faith was the official state religion (e.g. Russia [adopting the Gregorian calendar in 1918], Rumania [1919], Bulgaria [1915], Greece [1923]). Even when for practical reasons the Gregorian calendar was adopted by the laity, the religious feast days continued to be calculated according to the Julian Calendar. This situation persists in some countries to this day. Some of the Eastern Churches calculate all of their feast days according to the Julian Calendar (which is now 13 days behind the Gregorian calendar!). For example, the Ukrainian Orthodox Christmas is celebrated on the 7th of January.

Calendar is of course derived from Calends, the first day of the Roman months. Aptly our word of the day:

calends |ˈkaləndz; ˈkā-| (also kalends) plural noun
The first day of the month in the ancient Roman calendar.
ORIGIN Old English (denoting an appointed time): from Old French calendes, from Latin kalendae, calendae ‘first day of the month’ (when accounts were due and the order of days was proclaimed); related to Latin calare and Greek kalein ‘call, proclaim.’
Posted by Intelliblog at 01:59